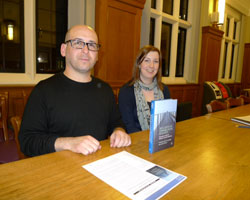 Research with criminals and deviants is explored in a new book co-edited by Dr Karen Lumsden from the Department of Social Sciences at Loughborough University.

The book: Reflexivity in Criminological Research: Experiences with the Powerful and the Powerless has been written with Dr Aaron Winter from the University of East London.  It is a collection of diverse case studies in which Dr Lumsden, Dr Winter and a range of international criminological scholars reflect upon their experiences working with both powerless and/or powerful individuals and groups. For qualitative criminologists about to head out into the field, the book is set to be a crucial resource.

A range of research settings are drawn on including those involving those involving the powerful such as state institutions, courts and prison to those conceived of as powerless, such as deviant and dangerous individuals as well as subcultures including boy racers and football hooligans.  Research participants defined as vulnerable, for example victims of crime, are also considered.

The case studies highlight the risks and dangers researchers face when working with criminals and deviants, as well as ethical, legal and moral dilemmas.

Dr Lumsden comments: “Research with criminals or deviants inspires academic reflection, particularly in respect of the risks and dangers which researchers may face in these contexts.  This collection contributes to, advances and consolidates discussions on the range of methods and approaches in criminology through the research case studies.”

The book was launched at an event held at the University.  At the launch Dr Lumsden and Dr Winter presented their work and took part in informal discussions with fellow scholars and practitioners with an interest in this field.

Dr Lumsden is co-director of the Policing Research Group at Loughborough University, a member of the British Sociological Association and the British Society of Criminology and a Fellow of the Higher Education Academy.   She is also author of Boy Racer Culture: Youth, Masculinity and Deviance (Routeledge, 2013).  As a sociologist of crime and deviance, and ethnographer, her research interests include policing, youth, car culture, and moral panics.