Loughborough University Selected as an Exhibitor for the Reinvent the Toilet Fair: India 21 March 2014 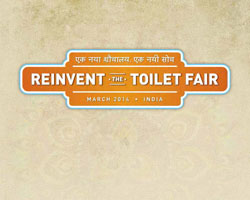 Fair to Showcase Advancements that Improve Sanitation and Health

Loughborough University announced today that they will be an exhibitor at the Reinvent the Toilet Fair: India event which will be co-hosted by the Government of India’s Department of Biotechnology and the Bill & Melinda Gates Foundation in March 2014.  Professor M. Sohail with his team will showcase Loughborough’s reinvented toilet that aims to help bring sanitation to those who need it most. The fair is also supported by the Indian Ministry of Urban Development.

The Reinvent the Toilet Fair: India aims to stimulate discussion and spur partnerships to improve global sanitation and bring affordable sanitation solutions to people who need it most. The fair is also an opportunity to recognize India’s leadership and commitment to improving child health and fostering innovative solutions to persistent development challenges.

The project led by Professor Sohail is one of approximately 50 exhibits that will be on display during the two-day fair.

The Loughborough Toilet is very simple – it is based on minimizing flush volumes and processing waste using hydrothermal carbonization with basic “pressure-cooking.” The guiding objective is to safely eliminate known pathogens while recovering scarce resources from waste; the recovered resources can then be used to finance safer disposal in a user-friendly and socially acceptable manner at household levels. The toilet’s configuration eliminates the hassle of separating urine and excreta, and may also take in other organic waste, such as sanitary napkins and food products. In domestic sanitation, size matters. The Loughborough Toilet’s compact size enables its ready use at household level.

“Of the 1.1 billion people who defecate in the open, almost 60 percent are Indian,” said Professor K. VijayRaghavan, secretary of the Indian Department of Biotechnology. “Sanitation solutions using the latest technology need not be complex or driven by expensive gadgetry, but they need to be innovative and address the many aspects of this multifaceted problem.”

“Today, because of a lack of toilets and poorly functioning infrastructure, massive amounts of untreated waste winds up in the environment, spreading disease,” said Brian Arbogast, director of the Water, Sanitation & Hygiene team at the Bill & Melinda Gates Foundation. “We are privileged to host the Reinvent the Toilet Fair: India with our partners to advance conversations about sanitation – it is a testament to the Indian government’s commitment to improving how we deal with this pressing problem.”

Note: attendance at the fair is by invitation only. No further invitations will be extended.