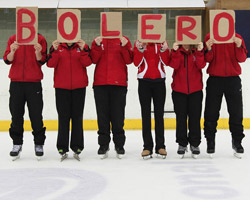 Writer, theatre maker and Loughborough University PhD student, Michael Pinchbeck is celebrating after his latest production, Bolero was performed at the Nottingham Playhouse at the weekend (Saturday 31 May and Sunday 1 June).

The performance marked the culmination of two years’ research by Michael exploring Bolero following his introduction to the music watching the Jane Torvill and Christopher Dean ice dance at the 1984 Sarajevo Winter Olympics.