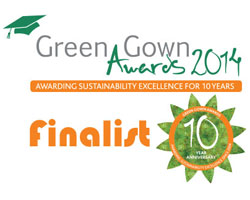 Loughborough University has reached the finals of the national 2014 Green Gown Awards, which recognise the exceptional sustainability initiatives being undertaken within the UK’s education sector.

Loughborough has been shortlisted in the ‘Continuous Improvement’ category for its Environmental Decathlon project – a portfolio of ten activities that aim to embed environmental management into the University’s ethos and practice.

The University’s Environmental Manager, Nik Hunt, explains: “We realised that having a ‘one-size-fits-all’ approach to try and tackle key areas such as waste and recycling wasn’t going to achieve the results we wanted. So we came up with the ‘decathlon’ of activities, which are tailored to address specific areas. The Inter-hall Environment League, for instance, capitalises on the competitive sporting spirit that’s endemic at Loughborough, pitting each of the 16 halls of residence against each other to be the best at increasing recycling and reducing energy usage.”

The Environmental Decathlon project has brought significant benefits. When it was first introduced in 2005-06, 91% of the University’s waste was sent to landfill; in 2012-13 that figure was just 5%.

“Alongside the demonstrable benefits there have been intangible ones too,” says Nik. “For instance, we now have good relationships with several local and national charities because we’ve visited them to understand more about what they actually need, rather than just giving them what we no longer require.

“We’ve also worked with the local authority to coordinate our environmental management practices and communications, which means that when our students leave hall and move into private houses in the town, they’re already familiar with all the council’s sustainability processes.”

All the Green Gown finalists now have to submit stage two applications, with the winners of the awards announced at a ceremony in Manchester on 3 November.

If Loughborough were to win the Continuous Improvement category it would then go head-to-head with its counterpart from the Australasian scheme, as part of the International Green Gown Awards.