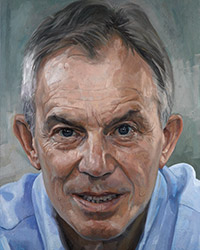 A portrait of Tony Blair by Loughborough University artist and academic, Alastair Adams has been unveiled by The National Portrait Gallery, London.

The painting was commissioned by the gallery in line with its wish to acquire portraits of all former British Prime Ministers.

The large oil painting (four feet by three) shows the former British Prime Minister in dramatic close-up. Begun in the spring of 2011, the first sittings took place at Tony Blair’s home, South Pavilion in Wotton Underwood, in Buckinghamshire, where Adams was able to begin working on sketches to establish a definitive pose. Working from life and using photographs for reference, Adams worked up several portraits in oils and in graphite. The resulting work is a very immediate portrayal of the longest-serving Labour Prime Minister and, to date, the youngest Labour Prime Minister to take up office since 1812.

Sarah Howgate, Contemporary Curator of the National Portrait Gallery, London, says: ‘The direct gaze of the sitter is uncompromising but also reflects his considerable skill as a negotiator on the world stage. The Gallery is now able to represent Tony Blair with a portrait consonant with the personality of an individual who has considerably shaped the political, economic and cultural climate of Britain.”

Alastair Adams is Lecturer in Graphic Communication and Illustration at Loughborough University, practicing portraiture and publishing papers that examine commissioned portraiture, life drawing within a modern educational context, drawing and visualisation and facial difference. He trained as an illustrator through which he developed his interest in figurative and portrait painting. In 2002 he was elected a member of the Royal Society of Portrait Painters and in 2005 became the Society’s Treasurer. In 2008 he was made President, the youngest in the Society’s 122 year history. He is also a Co-Director of the contemporary drawing research group and journal, TRACEY.

As well as Tony Blair, Alastair has produced paintings of many other notable subjects, including a number of Lords and former Metropolitan Police Commissioner, Ian Blair. Closer to home Alastair had also painted portraits of the University’s former Chancellor John Jennings and former Vice Chancellor Professor Shirley Pearce, the portraits of whom are on display in the Hazlerigg Building on the University campus.

Alastair comments: ‘I believe in creating natural, unassuming paintings based on an incisive, observational drawing practice.’

Tony Blair by Alastair Adams will be on public display from 13 January in Room 32, The Balcony Gallery, The National Portrait Gallery, London. Admission is Free.