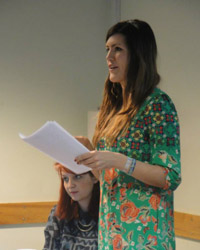 A Loughborough University student has been named ‘Inspirational Woman Student of the Year’ at the National Union of Students Women’s Campaign National Awards.

Rachel Dykins, 23, received the award at the NUS annual Women’s Conference in Bradford.

Rachel, who is in the final year of a psychology degree, won the award for establishing the Loughborough Women’s Network after taking on the part-time role of Women’s Officer last year.

She said the award was a ‘complete and utter surprise,’ adding: “I was so happy, but really overwhelmed.

“I think everything we have achieved in such a short space of time was instrumental in winning that award. We owe a lot to the fantastic support and encouragement of the Vice President for Welfare and Diversity, Isobel Ford.

“When I was in that room of 250 people I was completely in awe of the kind of work other women students around the country are doing. They are incredibly inspirational to me.”

Rachel ended up celebrating twice because the Loughborough Women’s Network, which she founded last November, was runner-up in the Women’s Group/Feminist Society category out of 30 nominations.

Rachel, who is from Brighton, said: “A lot of universities have a Women’s Officer in a full time position, so it’s easier to get things done and provide support to women students.

“This is the first year we have had a part-time Women’s Officer which is a massive step forward.

“Of the top 20 universities, we were one of only two who did not have a women’s liberation group.

“I remember looking for it when I first came here and was surprised we didn’t have one.

“But in my final year I thought ‘we need to do something about this’.”

The Loughborough Women’s Network emerged from an event Rachel staged called ‘What’s it like to be a woman at Loughborough?’.

More than 50 women attended and afterwards, another 48 applied to be members of the committee which is now 11 strong and chaired by Rachel.

Rachel said its aims are to represent women on campus and campaign for women’s liberation and equal rights.

The Loughborough Women’s Network will be Rachel’s legacy to the women of Loughborough University because she leaves at the end of this academic year and hopes to travel before starting work.