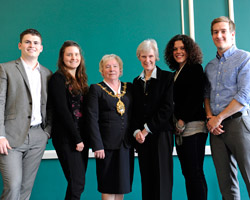 Nominations are now being accepted for two prizes which are awarded annually by the University to recognise good work completed by students in the community.

Residents are asked to submit their nominations by 22 March for the TS Shipman and Hannah Community Prizes.

The TS Shipman Prize is given to students of the University or College who are considered to have contributed most to the development of co-operation and aid between the institutions and the local community.  The prize comes from a fund presented to the University by the TS Shipman Trust, established by the former joint Manager Director of Leicester company AA Jones and Shipman – one of the largest machine tool manufacturers in Britain in the 1960s.

The Hannah Community Prize seeks to recognise students for showing acts of kindness or for general good neighbourliness.  The award uses funds originally bequeathed to the University in memory of Mr George Alexander Hannah who studied at Loughborough during his retirement.

An awards ceremony will be held later in the year to honour and thank the students for their contributions.

Alison Barlow, University community relations officer comments: “Every year we receive excellent and well deserved nominations for students which are prime examples of the valued contributions that students make to the local community.

“We are confident of more good examples this year and need local residents to let us know about the activities of students they are in touch with or who live close by.”

Nominations for the two awards can be made by any member of the Charnwood community and should be submitted to m.g.cajkler@lboro.ac.uk.