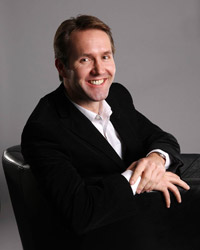 The UK is hailed as one of the world’s strongest internet economies and Loughborough University graduates are behind a number of its most promising companies including music and TV discovery service Shazam.

Along with Just Eat and PhotoBox, Shazam has recently been selected for Future Fifty, the government’s fast-track programme. Run by Tech City UK, Future Fifty selects high-growth companies to receive “concierge-style” support from mentoring to export assistance and strategic advice.

The Loughborough graduates in senior positions in Future Fifty companies are:

Simon Cobby (BSc Human Geography with Economics, 1994)
Simon is General Manager at MOO, an online print and design business founded in 2004. Today, it prints millions of business cards a month for hundreds of thousands of customers in over 180 countries. MOO has won three Webby awards (Web Oscars) and has a 75% NetPromoter rating.

Graham Corfield (BSc Accountancy and Financial Management, 1991)
Graham is the UK Managing Director at Just-Eat Group - the UK's No.1 online takeaway food ordering website. JUST EAT launched in 2001 and is now active in 13 countries, generating nearly £700 million in revenue per year for the restaurant industry.

Andrew Fisher (BSc Economics, 1991)
Andrew is Executive Chairman and former CEO of Shazam which launched its music recognition service in the UK in 2002 and is now one of the Top Ten most downloaded apps, connecting more than 400 million people worldwide to music, TV shows and adverts. Having recently launched the X Factor voting, Shazam is now using the 15 million identifications it makes each day to predict music’s next big artists and accounts for over 10 per cent of worldwide digital music sales.

Speaking about his time at Loughborough, Andrew said: “My years at Loughborough gave me a great start in life and gave me the confidence to be more entrepreneurial in my career. I constantly utilise the skills I developed both on my course and when I was Chairman of Royce Hall which have proved invaluable.”

Peter Janes (BSc Sport and Exercise Science, 2002) launched Shopa in August 2012, having previously built and sold The Post Network, a content distribution platform with fellow Loughborough graduates Paul Stewart and Charlie Cooper. Shopa was recently awarded the title of European Start up of the Year 2013 at IBM Smartcamp. Shopa is a rewards network that provides members with cash rewards whenever they buy and share from over 150 million products.

Professor Steve Rothberg, Pro Vice Chancellor for Enterprise at Loughborough University said: "I congratulate these graduates on their achievements which reinforce our strong tradition of student and graduate enterprise. Today, we actively support this potential through the Glendonbrook Centre for Enterprise Education and our graduate commercialisation Studio to encourage the next generation of business leaders.”