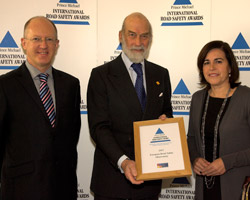 Professor Pete Thomas and Maria-Teresa Sanz-Villegas of the European Commission are presented with the award by Prince Michael of Kent.

The TSRC – part of the Loughborough Design School – is dedicated to reducing traffic casualties through its world leading research to understand the causes of crashes and propose safety measures.

The centre and its international research partners were presented with the award by the Prince at a ceremony in London, in honour of their work on the European Road Safety Observatory.

The award recognises achievements and innovations which will improve road safety and each year the most outstanding examples of international road safety initiatives are given public recognition through the scheme. It is managed by RoadSafe, a road safety partnership of leading companies in the motor and transport Industries in Britain, the Government and road safety professionals. Previous winners include Sweden, the Russian Federation, the Government of Oman, Royal Dutch Shell and Michelin.

The European Road Safety Observatory, created over a nine-year period, provides national and international road safety policy makers, for the first time, with the best data and knowledge available to support decision-making.

Led by Professor Pete Thomas at the TSRC, the development of the observatory was funded by the European Commission and involved 18 international partner organisations. It has become a standard tool for EU and national level safety policy development, with its website now receiving over 5,000 hits each month from road safety policy-makers across the EU and has been praised by the European Parliament.

Speaking about the award Professor Thomas said: “We are all absolutely delighted that this ground breaking project has been recognised by such a high profile award, and it is a testament to the team that has worked on it both here at Loughborough and across Europe.

“The vision of the European Road Safety Observatory was first established in 2003 when safety organisations recognised the difficulties of national level policy-makers in identifying best practise and making comparisons of road safety between countries. Even the most fundamental national accident data was only comparable for a small number of countries and for a small number of data elements.

“Continuing EU enlargement and the introduction of an EU target for fatality reduction emphasised the need to improve both the comparability and the depth of European road safety data. Between 2004 and 2013 the research team developed the structure of the observatory and for the first time assembled key data and knowledge in a form dedicated to road safety policy-makers. Since being established it has been emulated at national level by many EU Member States including the UK, Spain, the Czech Republic, Netherlands and France.”