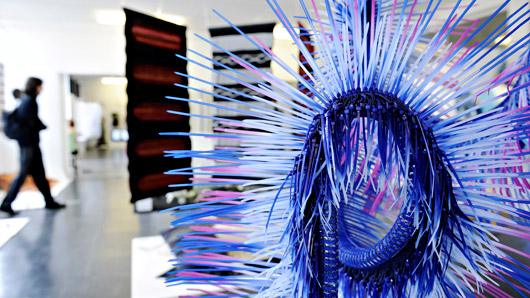 Summer of success for art and design students 14 August 2013

The academic year ended on a high for Loughborough University School of the Arts, with a number of students receiving awards at prestigious industry graduate events.

Ruth received the Lucienne Day Award of £1,000 from the Textiles Society, presented for innovation in textile design in honour of the British designer who pioneered the use of bright, optimistic, abstract patterns in the era following World War II.

Lilly was awarded the New Designers Worshipful Company of Weavers Associate prize of £1,000 for her outstanding design in woven fabric.  Lilly had also been presented with the Company’s £1,000 scholarship award in 2012.

Also at the exhibition, women’s clothing and home furnishings company Anthropologie purchased the entire display of Loughborough Textiles graduate Paul Roberts within 25 minutes of the show opening.
Paul was also selected for Texprint 2013 – a not-for-profit organisation dedicated to nurturing the best British-trained graduates in textile design. Each year it selects and mentors 24 new designers, guiding them into creative careers in fashion and interiors through the sponsorship of leading names in the industry such as Marks & Spencer, Pantone and The Woolmark.

Among the other student successes:

Fine Art student Ian Tricker took part in Free Range, an annual showcase of British based art and design graduates. He was one of ten emerging artists selected from 3,000 exhibiting students to receive a £100 bursary, automatic entry into the Signature Art Prize and on-going mentoring and support from Degree Art who specialise in identifying and mentoring talented graduates.

The annual degree shows are another highlight for our students in the School of Design and School of the Arts. Held in the summer, the shows allow students to display, and even sell, their innovative artwork, products and prototypes to members of the public and leaders in the art and design industry.

Visit the Design School website to see highlights from the 2013 Degree Show.