Salvador Dalí: entertainer who brought Surrealism to a mass market

My triumph will lie in the fact that I was able to overwhelm my period and at the same time achieve immortality.

This comment made by Salvador Dalí is quoted in a new documentary about the artist. As the familiar face of the longest-running art movement of the 20th century – Surrealism – Dalí was well aware of the power of his public persona. From his finely groomed moustaches to his public appearances with his pet ocelot, Babou, he cultivated an image that was instantly recognised in the worlds of art, entertainment and advertising.

By the time of his death on January 23 1989, Dalí had fashioned himself as a multimedia artist, writer and international celebrity.

The Surrealist movement began as a collaborative affair. In 1918, French poet Pierre Reverdy published an essay, The Image, in which he proposed a style of writing that would juxtapose “two more or less distant realities” connected by the imagination. The resulting image would not simply copy the world. Rather, it would generate a whole new reality. 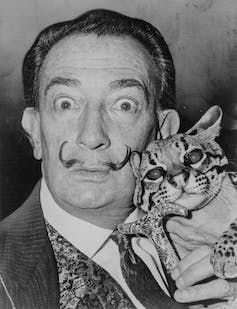 Inspired by Sigmund Freud, the writer André Breton extended Reverdy’s idea in manifestos published in 1924 and 1929 that encouraged artists to abandon rational control of their creativity. Dreams and the unconscious would motivate a new, “surrealist”, expressive style that demonstrated “the actual functioning of thought”.

Dalí became the most famous exponent of these ideas in visual art. His Lobster Telephone (1936) epitomised the chance collision of objects from different realms. Audiences could imagine cradling the lobster in the palms of their hands and speaking into its tail, the crunchy texture of the exoskeleton interrupting the seamlessness of everyday experience. 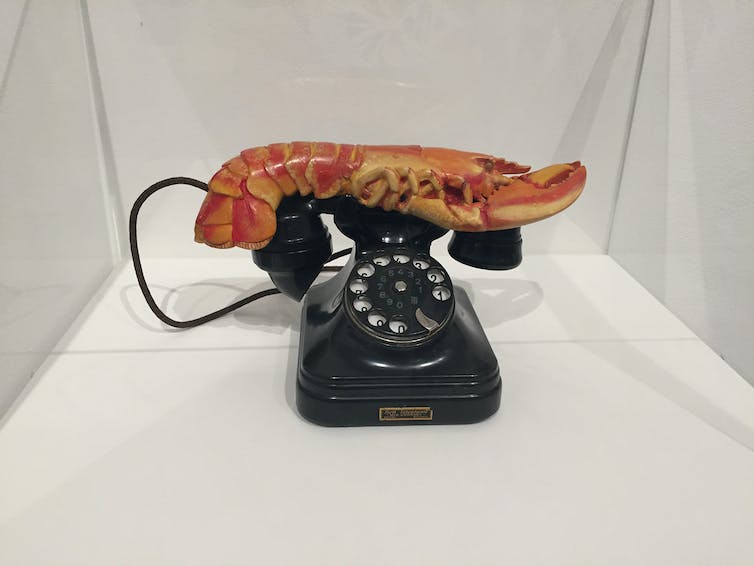 The possibilities were endless, as Dalí suggested in his autobiography:

The Lobster Telephone was not the only household item that Dalí produced. While Coca-Cola sold its product in a bottle that echoed the curves of actress Mae West’s body in 1916, Dalí turned to the star’s lips for inspiration in the mid-1930s. Working with his British patron, Edward James, on plans for a Surrealist home interior, Dalí created a luxurious settee in the shape of a mouth that promised to kiss, bite or swallow whole anyone who chanced to sit on it. A version of the work with a vivid scarlet upholstery was acquired by the Victoria & Albert Museum in 2018.

If Freud convinced bourgeois families that their lives were the stuff of Greek tragedy, Dalí suggested that world was fantastical because the individual psyche made it so. An early painting, The Enigma of Desire, My Mother, My Mother, My Mother (1929) is an erotic dream work indebted to Freudian psychology. The artist’s mother is portrayed as a monumental rock with the words “Ma mère” etched into caverns on its surface. First exhibited at Dalí’s solo exhibition at the Goemans Gallery in Paris in 1929, for 36 years it was a menacing presence in the consulting rooms of a Zürich psychiatrist, until its sale by Christie’s in 1982.

Making one’s dreams public can, however, be a dangerous thing. When Dalí produced a painting titled The Enigma of Hitler in 1939, even his Surrealist colleagues were troubled. Featuring a portrait of Hitler on a tiny postage stamp beneath a dripping telephone (once again with echoes of lobster claws), the work was hardly a celebration of the fascist leader. Nevertheless, Dalí’s admission of a “pathological” fascination with Hitler prompted Breton and other members of the Surrealist group to sever ties to their colleague. 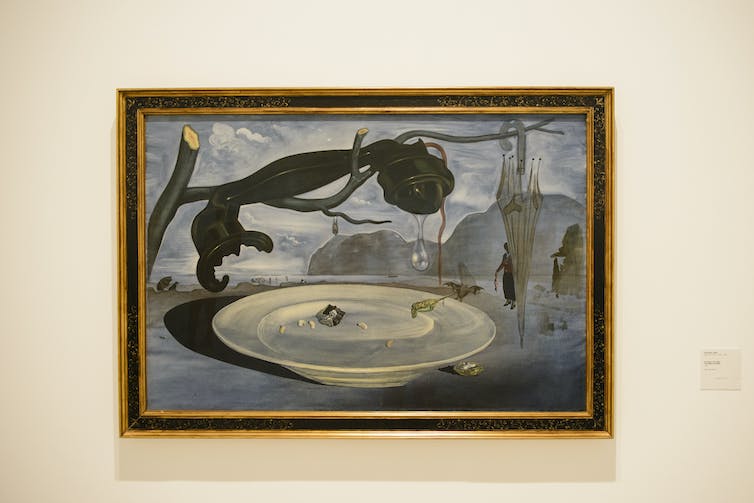 Dalí’s political failings were not the only reason for this falling out. According to Breton, Dalí had reduced Surrealism to popular entertainment. It is undeniable that Dalí courted a mass market for his works. Following his arrival in the United States in 1934, the artist designed magazine covers, participated in the television show “What’s my Line”, and produced advertisements for products ranging from perfume and lipstick to Alka-Seltzer.

By the time film director Alfred Hitchcock commissioned the artist to create a dreamscape for the finale of Spellbound in 1945, melting clocks, burning giraffes, and landscapes of repressed desires were a familiar visual repertoire of psychic life.

Dalí’s wife, Russian-born Elena Ivanovna Diakonova (known as Gala), was a crucial partner in her husband’s success. Contributing to recent scholarship that showcases the active role of women in Surrealism, an exhibition at the Museu Nacional d’Art de Catalunya reveals that Gala was more than a muse or model. She produced works in her own right, negotiated with art dealers, edited Dalí’s writings, and contributed to her husband’s creative output with works co-signed “Gala-Salvador Dalí”.

It has been suggested that Gala used tarot cards to predict Dalí’s future. If so, she might have foreseen his influence on the Chicago Surrealist Group, the Pop Art of Andy Warhol, works by Mexican muralist Marcos Raya, explorations of sexuality by Sarah Lucas and the cinema of David Lynch.

The celebrity culture that has developed around contemporary art owes much to Dalí’s humour, visual wit and cult of personality. Despite Breton’s concerns about the merger of art and entertainment, it was Dalí who shaped Surrealism’s enduring visual presence.