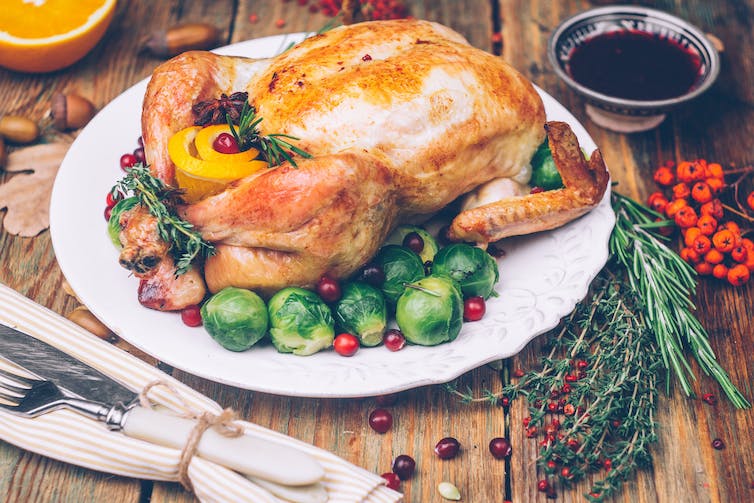 The traditional Christmas dinner in Britain is commonly roast turkey, roast potatoes, parsnips and carrots, Brussels sprouts with chestnuts, cranberry sauce, and pigs in blankets (sausages wrapped in bacon). Here’s how a no-deal Brexit could bring some bah humbug to the table. Items that are grown in the UK won’t be affected, but those that are imported will become more costly as they will be subject to tariffs and other expensive trade barriers.

Let’s start with the good news. Parsnips and carrots are grown in abundance in the UK. They are available throughout most of the year and are rarely imported from abroad. So even a Brexit as hard as a raw parsnip is unlikely to affect this popular Christmas side dish.

People with the Brussels sprouts-hating TAS2R38 gene are out of luck. Brussels sprouts are so abundant in the UK that they are actually exported around the world. The topical Christmas cracker joke, “How will Christmas dinner be different after Brexit? No Brussels” is unlikely to be true for the actual vegetable.

Although the UK is a major potato producer, some potatoes and potato products still get imported to meet UK demand. This mainly applies to frozen or processed potato products such as frozen fries. Due to a large harvest in 2016-17, the UK is expected to be a net exporter of fresh potatoes in 2017-18. Fresh potato imports have been predominantly from EU countries, but traditional suppliers such as France appear to have found other markets. UK fresh potato exports are predominantly to the EU (98%). 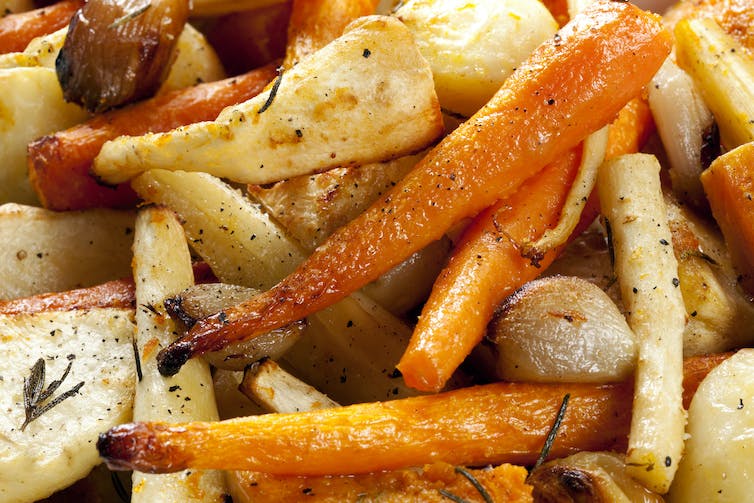 Shutterstock. The roast veg is safe.

So as long as growing conditions are favourable, there ought to be sufficient fresh UK potatoes to roast for Christmases to come.

It is thought that sweet chestnut trees were brought to Britain by the conquering Romans and, like many other immigrants, they have naturalised and become an important part of the food chain. In most years the nuts grow to a reasonable size in the south-east of England. But in other areas it is unusual for more than one of the fruits in each husk to reach full size. They are generally not harvested in time for Christmas, but can be preserved by boiling and freezing.

The fresh chestnuts you see at Christmas in the UK are mostly sourced from elsewhere in Europe. This is because sweet chestnut trees in the UK are threatened by both fungal blight and, more recently, the oriental chestnut gall wasp.

If having reasonably priced quality fresh sweet chestnut imports is important to you at Christmas, Brexit could be a problem.

Cranberries provide a splash of colour at the Christmas table. They also make a good option for retaliatory tariffs against the US, the world’s largest cranberry producer. The EU took more than 50% of US cranberry exports in 2018, with the UK leading the way. 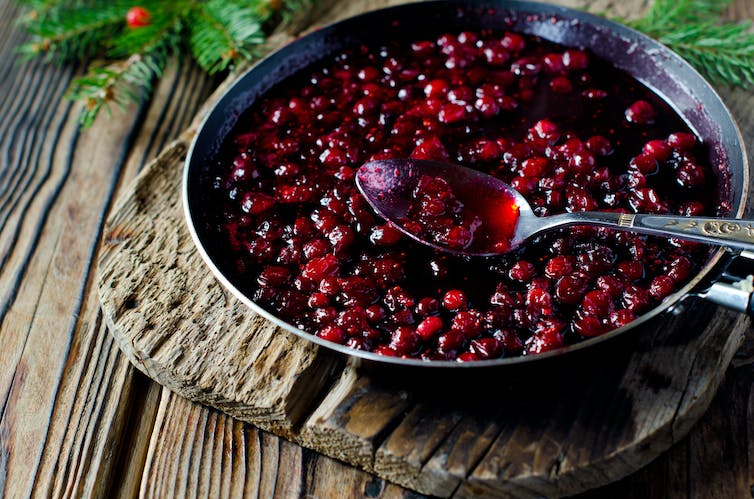 That is not to say the UK does not have its own cranberries. The two native cranberry species in the UK are Vaccinium oxycoccus (the Northern Cranberry) and Vaccinium microcarpus (the Small Cranberry). Wild harvesting used to take place in Scotland but, due to habitat loss, this is no longer done. As a consequence, the cranberries bought in UK stores are the species Vaccinium macrocarpon. These are harvested in North America and eastern Europe using a method that involves flooding the land which is impractical in the UK.

Vaccinium macrocarpon is also grown commercially on Terschelling, an island belonging to the Netherlands. The Netherlands is also a global trade centre for fresh fruit and vegetable imports and exported about €6m worth of cranberries in 2017 (many of which were grown elsewhere).

So the availability of cranberries in the UK is largely dependent on shipments from the EU. This supply chain arrangement may have to change after Brexit, particularly if the UK were to decide not to follow EU trade legislation. Depending on the flavour of Brexit, the costs of establishing a new supply chain independent of EU trade hubs and losing the economies of scale that the EU enjoys as a whole could lead to shortages initially and increased costs in the future.

The majority of UK families opt for roast turkey on Christmas day. This will cost them more if there’s a hard Brexit.

Turkeys are becoming more expensive to produce in the UK. Turkey producer Kelly Bronze’s prices, for example, are up by about 5.4% this year and have warned that a hard Brexit will affect their business by 70%.

A significant cost of producing turkeys in the UK is related to the labour cost of hand plucking. This relies on EU migrant labour and staffing for the Christmas peak and is a real concern. Brexit scenarios considered by farmers’ groups indicate that any deal which affects the labour pool is likely to lead to increased prices. 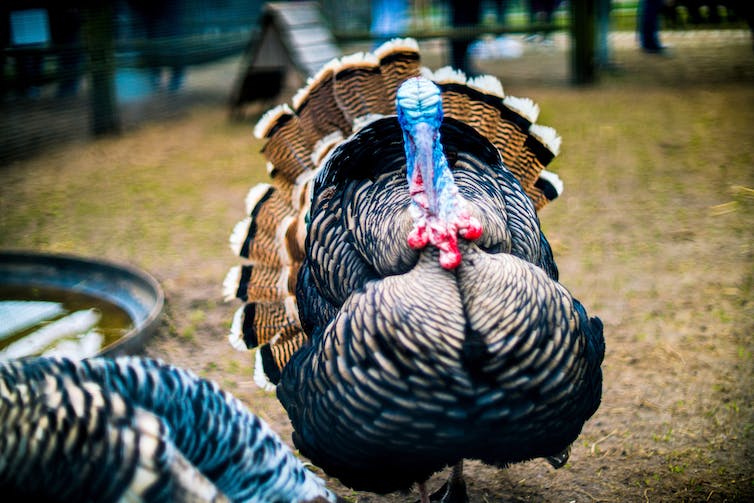 For those not paying a premium for hand-plucked turkeys, any Brexit trade deals imposing tariffs or import restrictions on cheaper turkeys from the EU would not make them cheaper for the consumer. A trade deal with the US might provide the option of turkey meat marinated in chlorine – not necessarily to everyone’s taste.

The average number of turkeys slaughtered in the UK per week in December 2017 was half a million birds or about 2m over the month. Allowing for the additional 1.6m from November, the figure is still more than 6m short of the estimated 10m consumed at Christmas.

The cost and availability of sausages wrapped in bacon is dependent on pork supplies. British farmers currently produce only 40% of the pork eaten in the UK. The other 60% comes from EU countries such as Denmark, Germany and the Netherlands. So, as with turkey, a hard Brexit would lead to a rise in the cost of sausages and bacon due to either import costs or supply and demand issues.

Christmas might only come once a year but Brexit is likely to make it even more expensive.