Barbie at 60: instrument of female oppression or positive influence?

Barbie Millicent Roberts, from Wisconsin US, is celebrating her 60th birthday. She is a toy. A doll. Yet she has grown into a phenomenon. An iconic figure, recognised by millions of children and adults worldwide, she has remained a popular choice for more than six decades – a somewhat unprecedented feat for a doll in the toy industry.

She is also, arguably, the original “influencer” of young girls, pushing an image and lifestyle that can shape what they aspire to be like. So, at 60, how is the iconic Barbie stepping up to support her fellow women and girls?

When Barbie was born many toys for young girls were of the baby doll variety; encouraging nurturing and motherhood and perpetuating the idea that a girl’s future role would be one of homemaker and mother. Thus Barbie was born out of a desire to give girls something more. Barbie was a fashion model with her own career. The idea that girls could play with her and imagine their future selves, whatever that may be, was central to the Barbie brand.

However, the “something more” that was given fell short of empowering girls, by today’s standards. And Barbie has been described as “an agent of female oppression”. The focus on play that imagined being grown up, with perfect hair, a perfect body, a plethora of outfits, a sexualised physique, and a perfect first love (in the equally perfect Ken) has been criticised over the years for perpetuating a different kind of ideal – one centred around body image, with dangerous consequences for girls’ mental and physical health.

Toys have a significant influence on the development of children, far beyond innocent play. Through play, children mimic social norms and subtle messages regarding gender roles, and stereotypes can be transmitted by seemingly ubiquitous toys. Early studies in the 1930s by Kenneth and Mamie Clark showed how young black girls would more often choose to play with a white doll rather than a black doll, as the white doll was considered more beautiful – a reflection of internalised feelings as a result of racism.

The same supposition – that girls playing with Barbie may internalise the unrealistic body that she innocently promotes – has been the subject of research and what is clear is that parents are often unaware of the potential effects on body image when approving toys for their children. 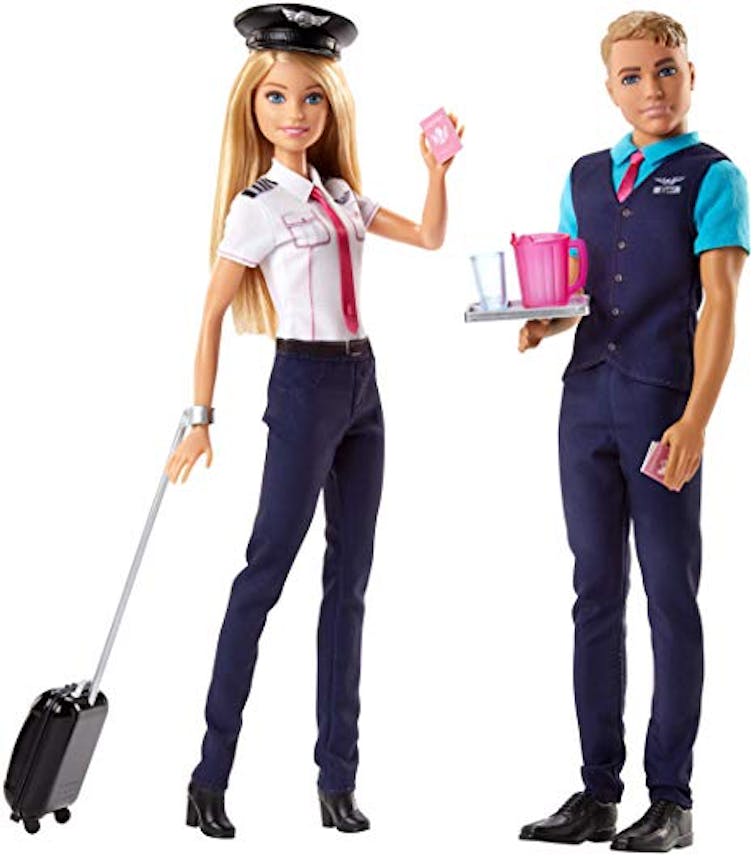 Pilot Barbie with her sidekick, Ken the steward. Mattel

A group of UK researchers in 2006 found that young girls aged between five-and-a-half and seven-and-a-half years old who were exposed to a story book with Barbie doll images had greater body dissatisfaction and lower body esteem at the end of the study compared to young girls who were shown the same story with an Emme doll (a fashion doll with a more average body shape) or a story with no images.

More worrying, there were no differences between groups of girls aged five-and-a half and eight-and-a-half years of age, with all girls showing heightened body dissatisfaction. Another study ten years later found that exposure to Barbie dolls led to a higher thin-ideal internalisation, supporting findings that girls exposed to thin dolls eat less in subsequent tests.

Exposure to unhealthy, unrealistic and unattainable body images is associated with eating disorder risk. Indeed, the increasing prevalence of eating disorder symptoms in non-Western cultures has been linked to exposure to Western ideals of beauty. Barbie’s original proportions gave her a body mass index (BMI) so low that she would be unlikely to menstruate and the probability of this body shape is less than one in 100,000 women.

With growing awareness of body image disturbances and cultural pressures on young girls, many parents have begun to look for more empowering toys for their daughters. Barbie’s manufacturer, Mattel, has been listening, possibly prompted by falling sales, and in 2016 a new range of Barbies was launched that celebrated different body shapes, sizes, hair types and skin tones.

These have not been without criticism; the naming of the dolls based on their significant body part (curvy, tall, petite) is questionable and again draws attention to the body, while “curvy” Barbie, with her wider hips and larger thighs, remains very thin. Despite this, these additions are a welcome step in the right direction in allowing girls to play with Barbie dolls that provide more diversity.

More than a body

If Barbie was about empowering girls to be anything that they want to be, then the Barbie brand has tried to move with the times by providing powerful role playing tools for girls. No longer is Barbie portrayed in roles such as the air hostess – or, when promoted to pilot, still dressed in a feminine and pink version of the uniform. Modern pilot Barbie is more appropriately dressed, with a male air steward as a sidekick.

Such changes can have a remarkable impact on how young girls imagine their career possibilities, potential futures, and the roles that they are expected to take. Mattel’s move to honour 20 women role models including Japanese Haitian tennis player Naomi Osaka – currently the world number one – with her own doll is a positive step in bringing empowering role models into the consciousness of young girls.

Honored to be selected as a Barbie Role Model to help inspire the next generation of girls @Barbie #Barbie60 #YouCanBeAnything #barbie pic.twitter.com/5LBZMsNXqJ

Children who are less stereotyped in their gender and play are less likely to be stereotyped in their occupations and are more creative. But of course, society needs to mirror this. In the week when Virgin Atlantic abolished the requirement to wear make up for female cabin crew, the arduous journey away from constraining female body and beauty ideals could slowly be taking off. But in a culture where female ageing is now an aesthetic pressure felt by many, perhaps Mattel will show us diversity in age and womanhood? Happy 60th birthday to the still 20-year-old looking Barbie.