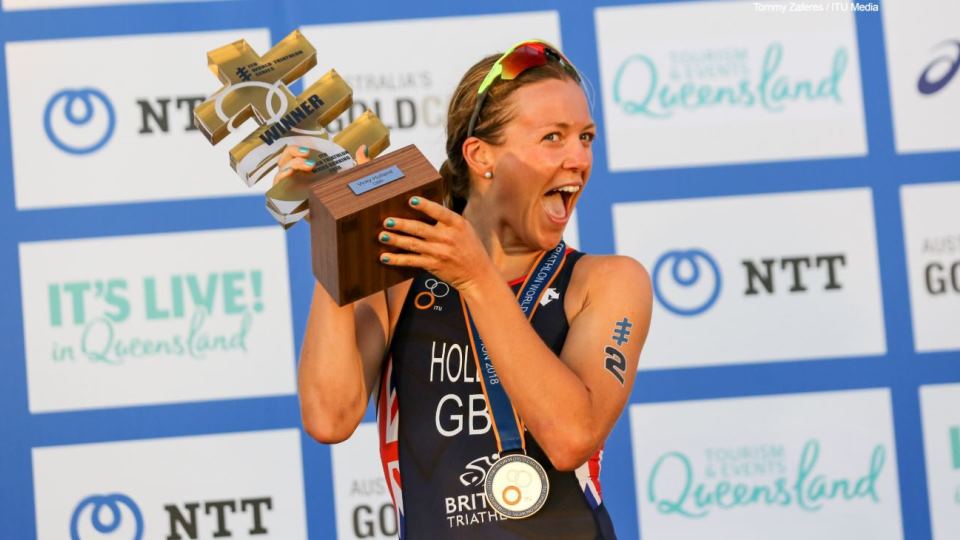 Loughborough University alumna Vicky Holland enjoyed yet another high point in her glittering career as she was crowned world champion for the first time, two years after winning bronze at the Rio Olympic Games.

Coming into the Grand Final, the final stage of the season long ITU World Series, Holland knew that she needed to better the result of American Katie Zaferes to be crowned world number one. After a brilliant swim saw her exit transition in the lead group, Holland rode strongly, coming into the second transition as one of eight leaders going out onto the 10km run.

From the get-go on the run three athletes broke clear – Australian Ashleigh Gentle, Holland and her arch-rival Zaferes. At the 5km mark it was the Aussie and American who had pressed on, leaving Holland some five seconds in arears but the Brit refused to give in, battling back in the last 10 minutes of racing to overhaul Zaferes and do battle with the Gentle for the win. In the end the Aussie won the sprint finish, which mattered little to the Loughborough alumna who knew she’d done enough to be crowned world champion.

"I thought at one point of the run that it was done because there was quite a big gap there - I can’t believe I brought it back in. This season as a whole has been absolutely incredible with three wins, two seconds and now the world title. It is so much more than I thought I would get out of the year!”

In the paratriathlon races every single LTPC member won a medal, a staggering achievement. Leading the way was visually impaired athlete Dave Ellis and his guide Mark Buckingham, Great Britain’s first medal winner of the day as he defended his world title thanks to a rapid final 5km run.

“What an amazing feeling. It was a tough race and I wasn’t sure it would happen but I got it on the run. We made the best of the race and stuck to our game plan. The guys went out harder than us but we built through it.”

Also winning gold was incoming University student Hanna Moore, defying her inexperience as the youngest member of the British team to take gold in the PTS4 race, afterwards commenting:

“On the bike I just went as hard as I could to try and create a gap to the other girls and then just hang on during the run. It was hot out there and a tough race but I am delighted with the result.”

Not to be outdone, Claire Cashmore, Fran Brown and Ryan Taylor all won silver medals, whilst George Peasgood won a hard fought bronze in the PTS5 race.

Also in action alongside Holland in the senior women’s race were Jodie Stimpson and Sophie Coldwell, the former bagging a top 10 finish, whilst Coldwell had a great swim-bike but ultimately had to settle for 27th on her senior debut. That being said, Coldwell is still an U23 and could have competed in that race, but chose to challenge herself against the seniors.

She did return to her own age group on the final day of action for the Mixed U23-Junior relay however, competing alongside Olivia Mathias and Matthew Willis. The four person team put in a terrific performance in this new event to take a brilliant bronze medal, the final Lougborough medal of the championships.

Mathias was 13th in the U23 women’s race earlier in the weekend, with Sophie Alden 23rd after a great swim. In the men’s equivalent Barclay Izzard had a solid outing for 15th, whilst incoming Loughborough University students Wilis and James Chantler-Mayne were 18th and 29th respectively in the junior men’s race. Last but not least was Iona Miller, the young Scot 34th in the junior women’s race on her GB debut.