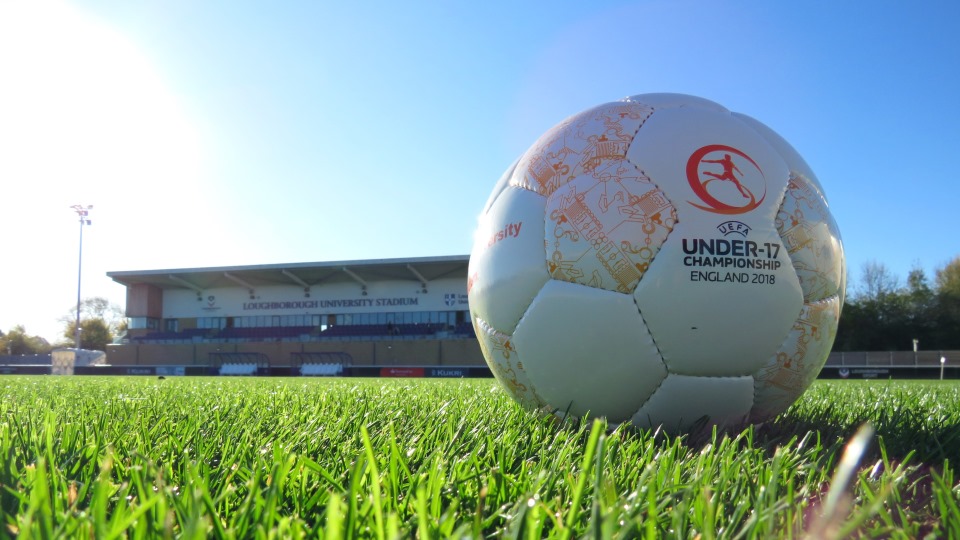 UEFA and The Football Association have named the venues which will host the UEFA European Under-17 Championship final tournament in May next year, with Loughborough one of six venues chosen.

Chesterfield will host the opening game and Rotherham United will stage the final, with fixtures taking place between 4-20 May. Tickets will go on sale in January with the final draw taking place at St. George’s Park in April.

Wayne Rooney, Eden Hazard, Paul Pogba and Mario Götze are some of the famous names to have appeared at this level in the past with the competition acting as the perfect platform for young players to showcase their talents. England who won the European Under-17 title in 2010 and 2014, and also finished runners- up to Spain in 2017, qualified automatically for the tournament as hosts.

“My colleagues and I are delighted that the 2018 UEFA European Under-17 Championships are coming to Loughborough University. Our purpose built football stadium will make a fantastic host venue alongside some of the larger football league grounds, and this event will add to the growing portfolio of national and international sporting events we are able to host on campus. A major developmental football tournament of this nature fits with our ethos here at Loughborough, and who knows how many stars of the future will be unearthed.”

"We are very proud to be hosting the men’s European Under-17 finals next summer. St. George's Park will be at the heart of training and matches and all six venues will give the players an opportunity to perform at different stadiums.

"Rotherham and Walsall have hosted a number of England development and women's team fixtures in the past while Burton Albion and Chesterfield are fantastic venues. Loughborough University is a world-renowned sports and educational establishment.

“The tournament gives the towns and regions an opportunity to see the best young talent from across the continent and we are very much looking forward to the challenge.”

“The European Under-17 Championship gives football fans an early opportunity to watch talented young footballers as they start out on what they hope will be successful careers in the game. The competition also provides the youngsters with an ideal chance to perform on an international football stage.

“I am very happy that the finals are being staged in England. The Football Association are experienced hosts of major football events, and we are all looking forward to an exciting and entertaining tournament.”