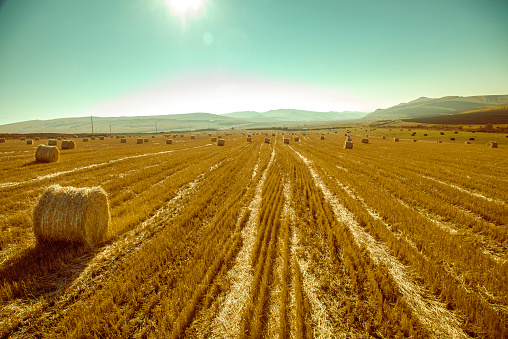 Experts from Loughborough University have been awarded a £40,000 grant to develop intelligent irrigation systems, based on data transmitted from two European Space Agency (ESA) satellites, to support the production of vital crops needed to feed the country’s 1.4 billion residents.

Water supply is a major issue in China – the world’s most vastly populated country – due to the intense demand, rapid urbanisation and severe pollution affecting potential resources.

Optimising provisions of fresh water for farming is seen as a significant goal for sustaining its huge, diverse landscape – which includes varied environments from forests to deserts.

However, the country is well below the standard level of efficiency regarding its irrigation practices compared to most advanced economies around the world.

Now, Loughborough’s Professor Wen-Hua Chen and Dr Cunjia Liu, of the Department of Aeronautical and Automotive Engineering, are working with colleagues from Jiangsu University, China, to interpret the satellite data with a view to boosting the efficiency of crop irrigation.

“The key to solving the challenge between the limited water resource and the needs of irrigation for maintaining crop productivity – and so feeding its huge population – is to have a high efficiency in the use of water for irrigation.

“However, the current efficiency of irrigation in China is only about 52%, which is well below advanced countries which can achieve an efficiency of about 70% to 80%.”

The solutions being developed at Loughborough involve merging the up-to-the minute satellite data with existing historical, meteorological and topographical information.

Earlier this month, the ESA launched its Sentinel-2B satellite, which joins the its partner, the Sentinel-2A, in orbit 500 miles above the Earth.

Both high precision optical imaging instruments will provide unique visuals of land and vegetation used for Chinese farming and will open up new possibilities for mapping and assessing the increasingly arid environment.

The data received by the scientists will enable them to improve the management and planning of irrigation and tailor the supply of fresh water to specific types of crops – wheat, barley, corn and millet – taking into account influences such as weather conditions and other significant factors.

Farmers will also be able to monitor, in real time, the growth and requirements of their crops to optimise the limited water supplies accordingly.

“The main feature of the project is, by using the satellite information, to decide, in real-time, whether or not irrigation should take place, and if so, where and how much.”

He added that the process is not limited to Chinese agriculture and has the potential to help countries all over the world improve their irrigation systems.

“The aim of this Phase 1 project is to prove the concept and investigate the feasibility of the proposed intelligent irrigation system with particular attention in its applications in the north part of China,” said Prof Chen.

“It is expected that the technologies to be developed in this project would be equally important for other countries in the world, for example Africa, where water resource is a major constraint in agriculture activities and productivity.

“The project idea is particularly attractive for poor countries as the remote sensing images from Sentinel-2 are freely available.

“Improving water use efficiency in agriculture not only contributes global food security but also has a much wider impact on environment and wellbeing in China and other countries.

“In some areas there is a constant battle between water usage for livestock, residences and agriculture.

“With the increase of living standard, residences in both cities and rural areas are consuming more and more water.

“This project will make a positive contribution in alleviating these severe environmental, wellbeing and social issues.”

The project was funded by the Newton Fund through Rothamsted Research on behalf of Science and Technology Facilities Council (STFC).