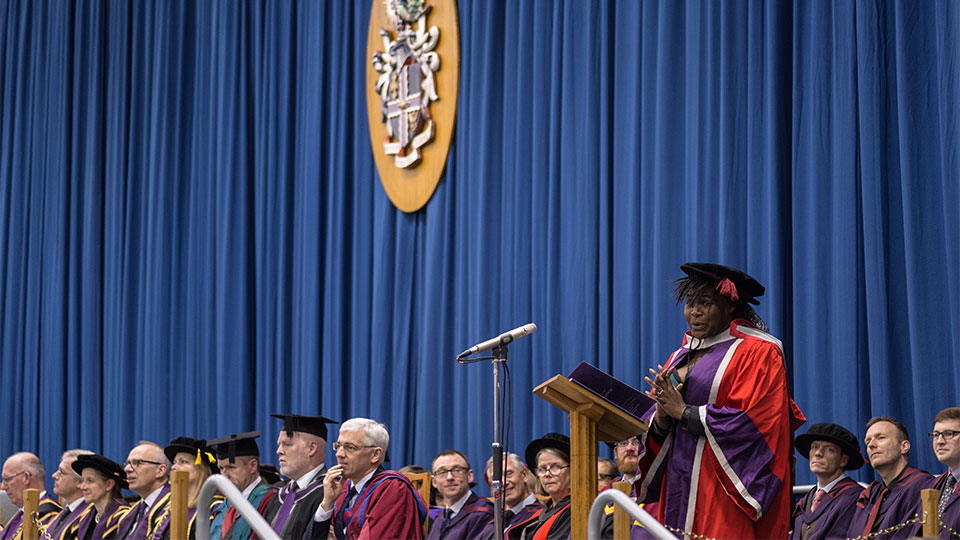 Space scientist and BBC Sky at Night presenter Dr Maggie Aderin-Pocock MBE has been awarded an Honorary Doctorate of the University “in recognition of her contributions to science”. 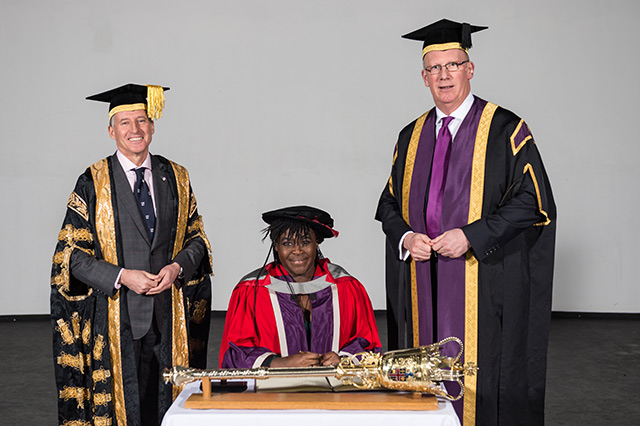 The degree was conferred upon her by Loughborough University Chancellor Lord Sebastian Coe at yesterday's winter graduation ceremony, which honoured the achievements of more than 1,100 students.

Maggie's passion is presenting science to a general audience, and she strives to demonstrate that you 'don't need a brain the size of a small planet' to understand, participate in and enjoy the subject.

Maggie has worked on many innovative projects and has also become a successful TV personality. She is currently presenting Sky at Night on BBC 4, Mini Stargazing for Cbeebies and is a panellist on Sky One's science quiz show, Duck Quacks Don't Echo. She also makes regular appearances on The One Show, Newsnight and Woman's Hour.

To further share her love of science, Maggie conducts 'Tours of the Universe' and other public engagement activities, showing school children and adults around the world the wonders of space.

Maggie has won a string of accolades for her work and was awarded an MBE for her services to science and education in 2009.

Back in 2014, the University had the honour of welcoming Maggie to the campus as she delivered the first-ever Claudia Parsons Memorial Lecture. Her talk, titled Women in Science: The Challenge, saw her discuss pioneering women in space science, her own adventures and triumphs and how female representation can be changed across STEM subjects.

Speaking at the graduation ceremony, Provost and Deputy Vice-Chancellor of Loughborough University Professor Chris Linton said: “As a university, we have celebrated the achievements of many great scientists over the years, and today we celebrate another; Dr Maggie Aderin-Pocock.

“Maggie is an outstanding role model, leading the way for future generations of scientists and encouraging audiences to embark on their own journeys in scientific exploration.”

Loughborough is one of the country's leading universities, with an international reputation for research that matters, excellence in teaching, strong links with industry, and unrivalled achievement in sport and its underpinning academic disciplines.

Loughborough is consistently ranked in the top twenty of UK universities in the Times Higher Education's 'table of tables' and is in the top 10 in England for research intensity. In recognition of its contribution to the sector, Loughborough has been awarded seven Queen's Anniversary Prizes.