University Fruit Routes project is back! 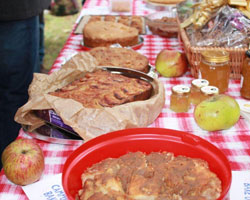 Loughborough University’s Fruit Routes project is back and is kicking off with Harvest Festivities. This year, the celebrations will be taking place in town as well as on campus.

Staff, students and the local community are invited to get involved in activities which include apple pressing, the Harvest Exchange and the Campus Apple Bake Off which is running again following last year’s success.

Harvesting on campus kick-starts the events running today, tomorrow and 14 October and invites people to pick abundant fruits from trees on campus to take home for free.

Following this on 15 October is the official apple pressing event where you can press apples from campus into delicious apple juice or transform at home into cider. The event takes place at Shirley Pearce Square, in association with Transition Loughborough, a community driven movement aimed at reducing the dependence on fossil fuels and promoting local infrastructure in Loughborough.

On 16 and 17 October, Fruit Routes will head to Market Town Corner, Carillon Court to continue its Harvest Exchange. Fruits, recipes, chutney, stories, ideas or something made with fruit are all welcomed to be exchanged with another item from the temporary Fruit Routes shop. The shop is being run in collaboration with Radar Loughborough and will also have a range of foods and teas to try, with the opportunity to learn about local food in Loughborough also on offer.

The final harvesting event and the judging of the Campus Apple Bake Off will run on 17 October with help from the Landscaping and Gardening Society (LAGS) and Transition Loughborough. The day consists of an artist led walk around the Fruit Route, free home-made soup, harvesting workshops and a talk on cider and fruit wine making before the Bake Off judging and eats take place to end the day. Entrants are welcome to use fruit they have collected from pick up points on campus.

Jo Shields said: “We’re looking forward to another year of Fruit Routes harvest celebrations and in particular the Campus Apple Bake Off after its success last year. We have lots on offer and everyone is welcome.”

For more information on the Fruit Routes harvest programme, with times and location of events, please click here.

For information about entering the Campus Apple Bake Off, please click here.

On 21 September 2015 the University opened an additional academic campus in London’s new innovation quarter. Loughborough University London, based on the Queen Elizabeth Olympic Park, offers postgraduate and executive-level education, as well as research and enterprise