Loughborough rises to 12th place in ‘Table of Tables’ 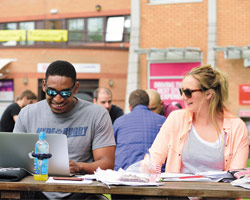 The league table is based on the combined results of the UK’s three main domestic university rankings.

Loughborough is ranked in the top 15 in each of the most recent national league tables, cementing its status as one of the country’s leading higher education institutions.

Speaking about the ‘Table of Tables’, Loughborough University Vice Chancellor Professor Robert Allison said: “We are delighted that the University is continuing to rise up the league tables.  It is further recognition of the unique environment we have created at the campus.”

The full ‘Table of Tables’ can be found below: