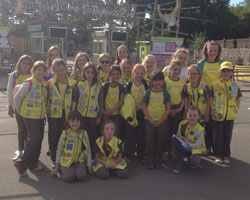 Loughborough University is delighted to kick off the first round of its Community Donations Funds programme for the academic year 2015/16.

The Community Donations Fund provides financial support to community groups and organisations across Charnwood as part of the University’s support for the local area.

Bids for this year’s Open Fund, can be submitted until 23 October. For the first time, the Open Fund will have two rounds of funding in the Autumn and Spring Terms. A total of £12,000 is being allocated, £6,000 per term.

Lucy Brotherhood of the 8th Loughborough Brownies received a donation from the Open Fund last year. She commented: “We received £750 from the University’s Open Fund last year for an adventure day at Twycross Zoo for the Brownies and had a fantastic day. Without the donation, we would never have been able to afford the cost of the trip which would have been disappointing for a lot of the Brownies.

“We also purchased an indoor parachute with the funding provided that we use for indoor and outdoor games. We can’t thank the University enough for their generosity and support.”

The Inside Out Fund, available to University staff, will also have two rounds of funding in the Autumn and Spring terms this year. The Strategic and Special Projects Fund are both set to run with dates to be confirmed.

Stakeholder Relations Manager for the University, Alison Barlow, comments: “We’re very excited to be launching the Community Donations Fund Programme for another academic year, especially because there are two rounds of funding available for the Open and Inside Out Fund.

“There are so many fantastic community groups who run amazing projects but many of them are facing increasing funding challenges so it’s great we can offer support and help through the fund. The two rounds will hopefully result in more bids and a wider range of groups receiving the support they need.”

Further information on the Community Donations Fund and applications forms are available by visiting www.lboro.ac.uk/community and clicking the ‘Donations Fund’ tab. Alternatively contact Kiran Beri, Communications and Public Engagement Officer at the University on k.beri@lboro.ac.uk or 01509 222 442.