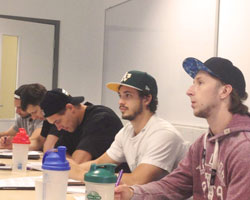 Elite professional ice hockey team, the Nottingham Panthers, paid a visit to Loughborough University this week as part of their pre-season training camp.

The team attended two masterclass sessions hosted by Loughborough’s School of Business and Economics to support their pre-season development work and help with team bonding.

The first session was conducted by leading personal development academic Dr Cheryl Travers, who helped the Panthers to gain a better understanding of personality types and how they affect team dynamics.

The second session was held by England and Leicester Tigers legend and Loughborough Rugby Coach George Chuter, who spoke about his experiences of performing at an elite level.

The Panthers then were given a tour of the University’s Powerbase Gym where the team learned about the LU’s high-performance strength and conditioning facilities, rounding off their trip with a meal at the University’s Nutrition Lounge.

The School of Business and Economics has an ongoing relationship with the Nottingham Panthers which this year includes three Panthers’ players enrolling on the Loughborough MBA course in October: Defenders Geoff Waugh and Jeff Dimmen, and Forward Brad Moran.

Their first home game of the season against the Braehead Clan takes place this Sunday 30 August and their first league game is on Saturday 5 September at home to Dundee.

We look forward to welcoming our new MBA students to campus and wish the team good luck this season!