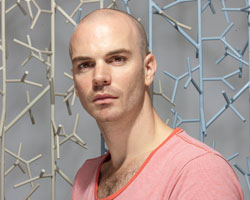 Benjamin and his team were selected to plan and design a space at this year’s Designs of the Year exhibition.

Design School graduate Benjamin took on the challenging brief and created displays for all 76 of the shortlisted projects ranging from architectural projects to cars, apps and fashion displays.

Benjamin Hubert said: “We’re increasingly involved with forward thinking brands so we were delighted to be involved with this year’s exhibition. The exhibition was a great platform for creative and innovative projects that are very in line with what we believe in.”

Professor Tracy Bhamra Dean of Loughborough Design School said “It’s inspiring to see one of our graduates doing so well. Designing the exhibition space at London’s Design Museum is a fantastic achievement which Benjamin should be extremely proud of.

“We look forward to watch his career develop even further and will continue to support him, it’s great to know his journey started here at Loughborough.”