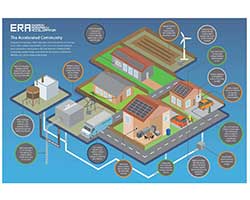 Gordon Waddington brings almost 40 years’ of engineering, strategy and leadership experience to the ERA partnership from both within and beyond the energy sector. This includes:

36 years at Rolls Royce, the world leading power-system designer and manufacturer, where amongst other roles he was Chief Engineer for the Typhoon Engine project and led the company’s Civil Nuclear New Build programme.

Co-authoring the Vision 2020 strategy that is playing a significant role in guiding development of the European aviation industry.

Leading the 2014 Government and National Nuclear Laboratory investigation into the potential of Small Modular Reactors to contribute to the UK’s low carbon future.

In addition to the above Gordon is a Fellow of the Royal Academy of Engineers and a former Chairman of the Industrial Advisory Board at Imperial College London. He was awarded the Royal Aeronautical Society British Gold Medal for contributions to technology advances in 2001.

The Energy Research Accelerator is based around a founding partnership between six leading UK Universities in the Midlands region – The Universities of Aston, Birmingham, Leicester, Loughborough, Nottingham and Warwick - and the British Geological Survey (BGS). Working with multiple industry partners. It will create new transformative and disruptive technologies that can be deployed in the Midlands’ growing manufacturing sectors creating new products for the UK and global market. It will provide new pathways to clean and resilient integrated energy systems that can be demonstrated and owned within city communities in the Midlands.

Midlands Innovation is a group of leading research-intensive universities - Aston, Birmingham, Leicester, Loughborough, Nottingham and Warwick - that is boosting research collaboration and sharing of equipment. The partnership is at the heart of the Midlands Engine for Growth.