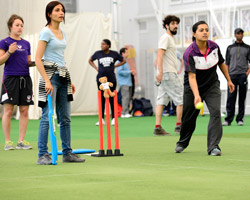 A group of international Chevening Scholars from universities around the country gathered at Loughborough University at the start of this month to learn the ins and outs of cricket at the ECB National Cricket Performance Centre on campus.

The Chevening Scholarship Scheme is the UK government’s global scholarship programme, which aims to bring young professionals, who have already displayed outstanding leadership talents, to study in the UK.

The 33 Scholars represented 15 nations, with the largest contingents coming from China and Indonesia. The others were from Brazil, Chile, Colombia, India, Jamaica, Kosovo, Lesotho, Macedonia, Malaysia, Nigeria, Pakistan, Ukraine and Vietnam.

All but three of the participating students were complete cricket novices.

Among them was a talented amateur film maker from Brazil – Julio Matos – who recorded the day’s events and has made his film available on YouTube.

The cricket session was the first-ever ‘Chevening Enrichment’ event, which aimed to bring the Scholars together for a joint, non-academic activity.

“It was a great success, thanks in no small part to the Vice Chancellor for the warm welcome he gave to our Chevening guests, to staff from the Sports Development Centre and the ECB coaching staff,” said David Chapman from the University’s International Office, which played an instrumental part in facilitating the event for the Chevening Scholarship Scheme.

“We hope it will be the first of many such occasions, perhaps including football too next time!”