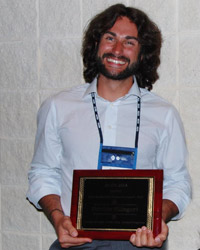 A Loughborough University PhD student’s award winning research into the body’s sensitivity to skin wetness could influence the design of a major international retailer’s sports clothing.

Davide Filingeri’s study, which discovered that people are more sensitive to skin wetness in certain areas of the body, was funded by Decathlon, a French sporting goods chain store.

It won him the 2014 Jack Borgenicht PhD student award and Davide is hoping the research will help Decathlon improve the design of their sports shirts with different materials used in the problem areas.

Davide’s study looked at whether people perceive skin wetness differently across their body, and whether some regions are more sensitive to it than others.

As a result, that is where they feel the most discomfort. As sweat evaporates it leads to a chilly sensation and that horrible cold/wet feeling all athletes endure as the shirt sticks to the skin.

Davide, who is based in the Environmental Ergonomics Research Centre in the Design School, said: “Skin wetness has been shown to be one of the main reasons for thermal discomfort.

“If we know that the lower back is more sensitive to skin wetness, and that that is something people don’t like, we need to target that region of the body.

“We want to ensure there won’t be a lot of wetness there so we might, for example, use a material in that area of shirts that has less insulation and is more air permeable, so the sweat will evaporate and not accumulate there. That way we reduce the amount of discomfort.

“One of the reasons we looked into this was the practical applications. Decathlon wanted to do fundamental research into physiology, thermal regulation, and sensation, so they can apply the research.”

Davide tested 12 regions of the bodies of 16 men, applying a cold-dry stimuli to induce a sensation of wetness both in a normal environment and also when the temperature was 33 degrees and 50 per cent relative humidity.

The research took him about six months and was one of seven studies that make up his PhD which ends in December.

It earned him the 2014 Jack Borgenicht PhD student award on behalf of the American College of Sports Medicine’ s Environmental and Occupational Physiology Interest Group, and the Foundation for Aging Studies and Exercise Science Research (TFASESR).

He received the award in Orlando at the American College of Sports Medicine’s annual conference, the biggest of its type in the world, which attracted more than 7,000 delegates.

Davide, who was touring America with his girlfriend when the awards were announced, said he was shocked when he was told he had won.

He said: “It was an unexpected surprise and I was overwhelmed when I found out.

“I was in between conferences and travelling with my girlfriend and I didn’t have a lot of internet access.

“I found out through Twitter because one of my colleagues wrote me a message. I didn’t know what he was talking about so I checked my emails.

“And I thought, ‘Wow’. It was a nice feeling and quite an achievement.”