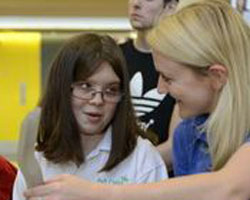 Rhianna Bacon enjoying her time at the Design School

Some pupils from two East Midlands schools have been inspired to go on to higher education after working with Loughborough University students.

Pupils from Ash Field Academy, in Leicester, and Hinckley’s Dorothy Goodman School spent a day with Design School under-graduates who helped them turn their toy designs into reality.

He said: “We showed them the degree show work and they were very excited.

“The teachers and support staff from both schools said there were a number of pupils who were inspired to go and do CAD related things at technical college or higher education.”

Azmeena Abdulla, from Ash Field Academy, said: “Our students have had an amazing experience. Touring the degree show was quite exciting as our students recognised some of the University students’ designs.

“They have been motivated to see their own designs being developed further and being made into a product. Some would like to go on to a technical college where they can design and create products using CAD that would help them in their daily lives whilst moving around in a wheelchair.”

Georgina Palmer, from Dorothy Goodman, said: “The students found this to be a rewarding day on many levels.

“The day provided a glimpse into the world beyond the school gates and what can be possible to achieve.

“Whether the goal of a higher education course is reached is immaterial, the experience provided challenge and increased expectation within the students and the experience of, in this case, interacting with others who speak a Design vocabulary.”

Pupils from Ash Field Academy, which caters for pupils with physical disabilities and learning difficulties, have been visiting the Design School for more than 10 years.

This was the first time for Dorothy Goodman, a school for pupils with additional needs, but Mr Torrens said, based on this taster day, he hoped it could become an annual event for them too.

Mr Torrens said: “The teachers were very happy, the pupils really enjoyed it, and the under-graduates thoroughly enjoyed what was a very intense day.”

The project involves the Design School students paying four visits to the schools to help the pupils with their designs before the pupils visit the university for a ‘fun-reward’ day.

Mr Torrens said the scheme was mutually beneficial. “It’s empowering for the pupils and it encourages our students to listen and respond in the appropriate way to someone else’s needs,” he said.

“The students work alongside pupils who have additional needs, both physical and learning difficulties, so rather than designing surf boards, or whatever, they design for people who have very different lifestyles to them.

“The skills required are quite rigorous and complex to come up with a useable working solution.

“It is mutually beneficial. We have had some research published which demonstrates that the pupils pick up very quickly the professional design process.

“It gives them a chance to articulate what they want and then see it realised in front of them.”