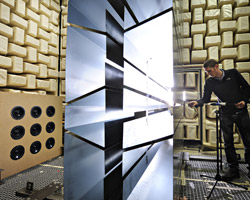 Loughborough University Enterprise Award winner, Daniel Elford, is going to Buckingham Palace this evening for a special reception given by Her Majesty the Queen and His Royal Highness the Duke of Edinburgh, in celebration of the technology sector’s contribution to the UK economy.

Daniel is representing Sonobex, a spin out company that designs and produces innovative noise reduction barriers and enclosures for road, rail, Industrial engineering and construction.

Daniel graduated from Loughborough’s Physics Department in 2007 and worked on the breakthrough noise reduction technology during his PhD. The team’s work attracted significant funding from the Engineering and Physical Sciences Research Council, Royal Academy of Engineering, Technology Strategy Board, European Regional Development Fund and East Midlands Transport iNet, to accelerate its commercialisation.

Loughborough University Pro Vice Chancellor (Enterprise) Professor Steve Rothberg said: “The technology Daniel has helped to develop offers significant environmental and aesthetic benefits over existing noise reduction solutions. I’m delighted that Daniel’s achievements have been recognised at the Buckingham Palace reception, and he will continue to enjoy our full support for Sonobex.’’