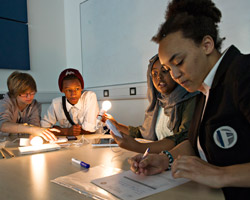 The University’s geography department welcomed year 9 and 10 students from six Leicestershire and Nottinghamshire Schools for a packed day of workshops and practical experiments highlighting climate change and disaster management and showcasing the breadth of work carried out by geographers worldwide.

Pupils built and tested their own glaciers, experimented with kit used by arctic explorers, planned natural disaster relief efforts, and put insects under the microscope to help them understand the impact of climate change.

They also took part in sessions exploring local, regional and global environments to predict how climate might change in the future.

In commemoration of their visit, pupils joined the University’s Vice Chancellor Professor Bob Allison to bury a time capsule containing photos and posters produced by students during the day. They also planted a tree.

“We wanted to give pupils a taster of what we do here at Loughborough, and showcase some of the different ways we use geography in the real world, at the same time as highlighting the threat of climate change.

“The pupils have really enjoyed their hands-on experiences today at Loughborough and we hope it will encourage some of them to consider studying geography at a higher level.”

Experts from the British Cartographic Society and UK Polar Network and a group of Royal Geographical Society Ambassadors were also on hand to help with activities.

Loughborough University runs a variety of events for school students throughout the year. To find out more about the variety of opportunities available, or to register your interest for this event in 2015, email soar@lboro.ac.uk