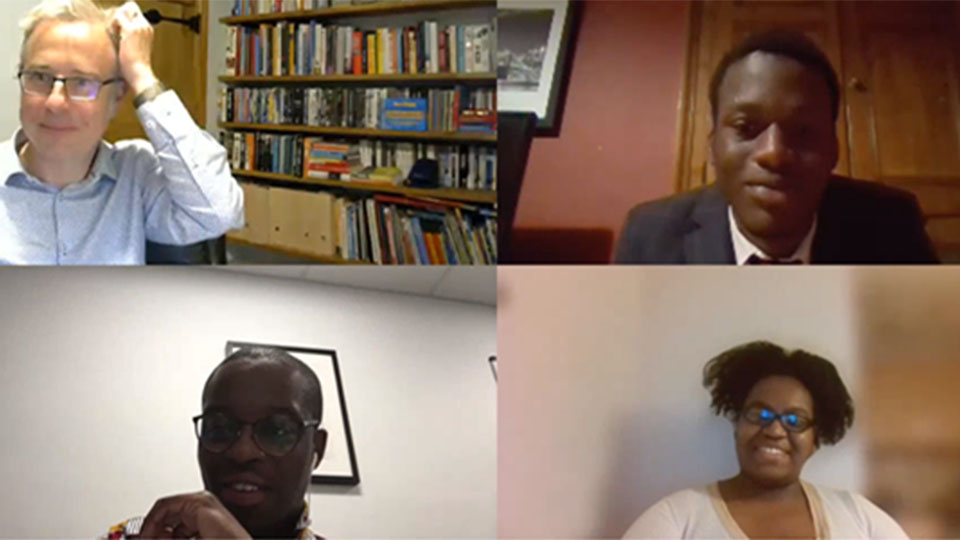 On Wednesday 14 October, a panel of staff from the University and Loughborough Students’ Union (LSU) came together online to discuss the experiences of Black people on our campuses and in the UK, and the work of the Race Equality Charter.

The discussion was chaired by the University’s Chief Operating Officer and Race Equality Co-Champion, Richard Taylor.

The talks held were not only insightful, but also challenging and helpful to those who attended.

The conversation began by Richard asking the panellists about how their racialisation as a Black person shapes their experiences both at Loughborough and in the UK more generally. Tara began by speaking about the challenges of growing up in an area that was mostly white, and although when starting at University it felt much more diverse, she explained it is the small things that can affect you the most, making reference to the difficulties of finding a hairdresser that could do her hair in the local area as an example.

Fejiro echoed Tara’s point, acknowledging the difficulties of finding a barber for himself, and told his story of growing up in Nigeria where race was not considered an issue the same way as it is in the UK. During his time as a student, he became involved in the Nigerian Society and was also the Chair of the International Student Network and talked about how both of these groups supported him and others.

James shared his thoughts on the issue of frequently feeling out of place, and the overt and covert ways in which the UK society has made him feel like he does not belong.

The trio all acknowledged how the University has progressed over the years – from the important conversations that are being held around race and antiracism, to the way serious incidents are handled by senior management – but noted that although the culture is slowly shifting, there is still much work to be done on race equality.

Both Tara and James are part of a team working hard behind the scenes on the University’s Race Equality Charter (REC), which is due to be submitted for a Bronze award in July 2021. The REC aims to improve the representation, progression and success of all minority ethnic staff and students and address issues of racism at Loughborough. This work has involved looking at existing data, policies, and procedures in place for professional and support staff, academic staff, student progression and attainment, and diversity of the curriculum.

When the panel were asked to identify some priorities for the University, the following points were raised:

There was also time at the end of the session for attendees to put questions to the panel, who asked about how the Race Equality Charter can be made more visible within the institution, how to support BAME students, how various groups can work together to change the culture and how progress can be made to reshape the curriculum.

To close the event, the panel shared their final thoughts; the overall view was that progress has been made at Loughborough and will continue to do so, but we still have a long way to go. The panel encouraged attendees and the wider staff and student body to continue the conversation on race and tackling racism.

Tara Nadi commented: “Studies have shown that organisations which have more diverse leadership are more successful. This is a team effort. A Bronze award for the Race Equality Charter won’t change anything, it’s the people in our community that will change our culture.”

You can find out more about the University’s Race Equality Charter here. There are also a number of resources available online covering various aspects of race, racism and becoming anti-racist which can be accessed via the University’s EDI webpages.

If you would like to watch a recording of the event, please get in touch. This event is part of the University's Black History Month activities, more of which can be found on the dedicated website.

#LboroAppliedAI talk: Designing user experiences at the intersection of AI and design