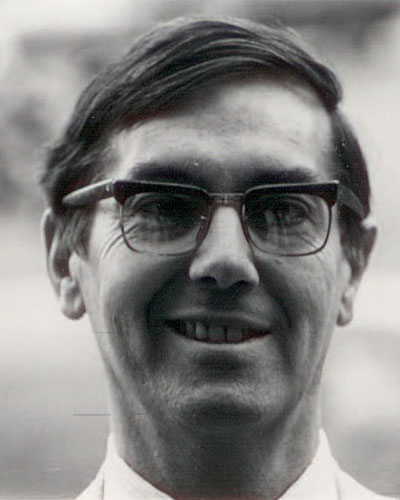 We are sad to inform colleagues that Les Mustoe, a well-known retired member of staff from the School of Science, has died.

Thoughts and condolences got to his family and friends and all those at the University who knew him.

Thanks to Sandie Dann from the School for sharing these insights into Les and his time at Loughborough.

During the early years, he was a sub-warden at Loughborough Faraday Hall and it was there, and while teaching mathematics to the Engineers, where he was first recognised as being totally dedicated to the student educational experience, albeit not entirely conventionally.  His ability to identify students by name by the end of week two of term was legendary as was his locking of the door two minutes after his lecture had started. It was a very brave student that turned up late to a Mustoe lecture and it never happened more than once!

Long before widening participation targets and outreach were ever considered a major concern, Les identified a major flaw in the provision of Mathematics to pre-University students. The weaknesses meant that many students did not have the background to study Engineering at University and needed extra support if they were ever going to be able to succeed as Engineers.  Les did a number of things as a result of this realisation, including authoring text books and spending endless additional hours with many University students who benefitted enormously from his mastery of the subject. He also supported many generations of children of University staff to achieve their Mathematics A levels and volunteered at a local School in Hitchin to do the same once he retired.

One of the biggest areas of impact through his concerns for those not prepared for University was through the birth of the Science and Engineering Foundation Studies Programme (SEFS) in 1991; one of the first of its kind in the UK.  Les had the idea that he would take 25-30 students who were unable to do the appropriate A levels due to the paucity of STEM provision in some areas of the country.  He said it was one of the few times he was lost for words when 95 turned up on day one. Although the cohorts grew and grew to a steady state of 150, every single student was invited around to tea at his house (the invitation read ‘with one chocolate biscuit but definitely not two’). His dedication to the many foundation students and their fondness for him can easily be seen through his Facebook page. It was his students who nominated for the University medal in 2004 when one of them wrote: “Never have we known any educator go so far to help and educate. Les Mustoe is a man truly dedicated to his students and to mathematics… He is a man never too busy to help.”

I had worked alongside Les on the Foundation Programme for 11 years before I took over as the Director of SEFS in 2008.  I was very conscious of taking over ‘his baby’ and was worried that I would be able to live up to his high standards. He was amazingly generous in giving me time and building my confidence to do the role in the handover period, demonstrating over and over the kindness of the true gentleman that he was.

While new to the role, Foundation Year Network colleagues shared with me how committed Les had been in his role of external examiner on various programmes over the years. This had included correcting not only the mathematics but also the grammar in the University examination paper rubrics.

He was quite a talent at impressions and Julie Reay (the Programme administrator) and I often giggled unashamedly as he mimicked Aleksandr Meerkat (from Compare the Market) and my (Surrey) and her (Newcastle) accents.

It is with trepidation that I sign off from writing this piece about a man I truly respected. I am unsure that I have really done the great man justice, but I also know my comprehensive school English is probably not up to his exemplary standards.

An obituary will appear in the IMA Magazine shortly for colleagues who would like to read more.