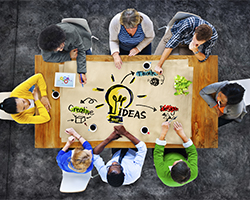 Loughborough University recognises emerging entrepreneurial talent in the finals of the Leicestershire County and East Midlands, Young Enterprise Company of the Year Competition.

The competition, held annually, requires students to set up and run a real company for one year under the guidance of an adviser from the business community. This includes opening a business bank account, designing and manufacturing products, selling directly to customers and paying taxes.

Hosted by the University, the competition is organised in partnership with Young Enterprise, a national education charity dedicated to inspiring young people to succeed through innovation.

At the Leicestershire County Final, six groups of students from the Area Final will present their company before a panel of independent judges from business and education-related disciplines.

Professor Tracy Bhamra, Pro Vice-Chancellor (Enterprise), will open the event which will take place on Thursday 21 April. Loughborough graduate, Becky White, will also provide a keynote speech on her journey as an entrepreneur with business, onesixeight:fitness. Loughborough will be sponsoring the Innovation Award at the County Finals.

Winners from each County Final will go through to the East Midlands Regional Final on Tuesday 28 June, hoping to secure a place at the UK Final in London.

Emma Leech, Director of Marketing & Advancement, will open the event which will feature a keynote speech from Design School graduate Ross Kemp, Founder of Asap water crafts. Ross will share his experiences of launching his lifesaving solo craft in Loughborough’s incubation hub, The Studio and will judge the Innovation Award at the event.

The University will sponsor two awards at the Regional Final – the Overall Runner Up and the Overall Winner.

Professor Tracy Bhamra comments: “The University is very pleased to be hosting this event once again as we recognise that the Young Enterprise Competition provides young people with an invaluable experience. In particular it enables them to develop the eight key skills for life and work: communication, teamwork, problem-solving, initiative, financial capability, organisation, confidence and resilience.”

Julie Holland, director of the University’s Glendonbrook Centre for Enterprise and Education, School of Business and Economics,said: “Our Centre is keen to support future entrepreneurs and entrepreneurial behaviour in young people, and we are delighted that the University will be hosting the Young Enterprise County and Regional competitions this year."

The event will take place in the Sir Denis Rooke Building at the Loughborough University Science and Enterprise Parks.