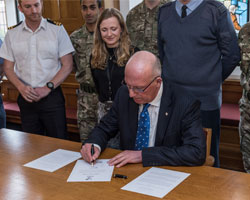 The University signed a new covenant yesterday as part of its pledge to support the armed forces community.

The Armed Forces Covenant is way for businesses to demonstrate their support for the military community, by recognising the value serving personnel, reservists, veterans and military families bring.

By signing the covenant, the University agrees to endeavour to support the armed forces community in a number of ways including; supporting employees who choose to be members of the Reserve forces, offering support to local cadet units, actively participating in Armed Forces Day, working closely to support the work of the Defence and Rehabilitation Centre, and more.

In addition to the pledge, the University also plans to place a submission in the Defence Employer Recognition Scheme (ERS). The scheme encompasses a number of awards for employer organisations that pledge, demonstrate or advocate support to defence and armed forces communities, and align their values with the Armed Forces Covenant.