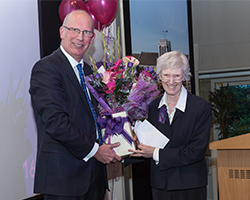 Loughborough University hosted its inaugural Placement Student Awards on 16 June to celebrate the outstanding achievements of its students.

More than 8,000 votes were cast to decide the three winners who exceeded their 12-month placement briefs, delivering real impact to their host organisations.

More than 90 guests attended the Awards ceremony which was held at Loughborough University’s Science and Enterprise Park and hosted by the University’s Vice-Chancellor Professor Robert Allison.

The winner of the Private Sector – over 2000 (employees) Award was Product Design Engineering student Adam Littleboy for his outstanding work with Rolls-Royce.

He joined the company as a Manufacturing Engineer within the Aerospace Supply Chain team. As well as completing his own placement responsibilities, Adam volunteered as a STEM Ambassador and was part of the team that won the Community Prize in the EVP Awards.

In recognition of his work, Rolls-Royce employers nominated Adam for the National Undergraduate Employability Award and have offered him a summer internship.

During her placement, she progressed from supporting colleagues to developing her own increasingly complex concepts, demonstrating a sophisticated understanding of the mechanics, processes and tools involved. She has since secured a graduate role within the company.

Professor Robert Allison commented: “I am thrilled to have hosted the inaugural Placement Student Awards, it is always a pleasure to recognise our inspiring students’ hard work. I would also like to thank all of the organisations who give our students such fantastic opportunities, without them none of this would be possible. Congratulations to all our finalists and winners."

The evening celebrations concluded with special awards to recognise the achievements of University staff retiring later this year: Nigel Zanker has championed technology education and teacher training in Loughborough Design School for 25 years, and has helped launch the careers of 500 design and technology teachers, in the UK and overseas. Pro-Vice-Chancellor for Teaching, Professor Morag Bell has championed the initiative to enable every Loughborough student to engage in a work placement. This has played a significant contribution to the University’s very high standing in graduate prospects league tables.

Films about the finalists and photographs from the evening are available on the Placement Student Awards website.