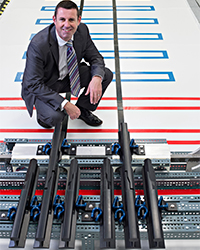 Professor Dixon with the prototype track switch which has entered into the next stage of development.

Breakthrough railway technology masterminded by Loughborough University engineers has entered into the next stage of development with industry backing.

Repoint is a robust and reliable points concept which breaks with 200 years of tradition to offer a change in design that will increase reliability, reduce maintenance costs and boost capacity on the railways.

It is the result of research carried out with industry experts into improved switches which eradicate known issues with existing designs.

The two-and-a-half-year project, funded by the UK rail safety body RSSB (formerly known as the Rail Safety and Standards Board), will see a full scale, prototype track switch developed and deployed.

Using safety concepts derived from aerospace and the nuclear industries, Repoint allows redundant, fail-safe actuation and locking of track switches for the first time. This means that a failure of a single actuator element will not cause the failure of the entire switch – allowing trains to continue until such a time as maintenance becomes feasible.

With increasing traffic density throughout the network, windows for maintenance work are becoming tighter, which is why the Repoint technology – which will be developed alongside RSSB, London Underground, and its supply base – has so much potential.

Professor Dixon, Head of the Control Systems Research Group, said: “Bringing Repoint a step closer to operation is a fantastic achievement with the potential to fix a 200-year-old problem on rail networks around the world.

“Great Britain’s rail network, in particular, is under pressure to provide increased capacity and reliability at a reduced cost. With the support of RSSB, we can make track switch failures a thing of the past by introducing a cost-effective alternative which has not been seen before.”

Neil Webster, RSSB Future Railway Programme Director, commented: “Our continued support for the Repoint project reinforces our belief in the technology and the potential it has to deliver real, tangible benefits to the future of the rail industry. We look forward to seeing the design once implemented, improving reliability and increasing capacity on our ever expanding rail network.”

With RSSB and Loughborough University at the forefront of implementing the technology in the UK, opportunities are now being pursued with development partners to roll out the patented technology across international rail networks, with discussions so far held with companies in South Africa, Australia and China.

To find out more, contact Colm Watling, IP Officer at Loughborough University, on 01509 222943 or email C.Q.Watling@lboro.ac.uk.