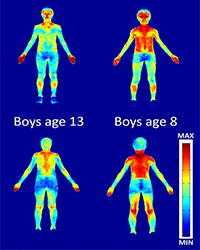 Loughborough researchers have been working with leading sports brand adidas to help develop sports tops specifically for children that help keep them cool during exercise.

Led by Professor George Havenith from the University’s Environmental Ergonomics Research Centre, the Loughborough team looked at the body heat management of children aged 10 and under.

They found that while teens and adults tend to keep their skin cool by evaporating sweat, this is less developed in children under the age of ten. Younger children’s skin is more reliant on dry heat loss all over their body, leading to a hotter skin. With a reduced sweat response, they require full body ventilation to stay cool and avoid overheating during a workout.

Using this information adidas has developed a range of ‘climacool’ training tops aimed solely at children under 10 which offer full air flow during exercise.

Speaking about the research Professor Havenith said: “In the study 16 boys and girls in each age group – around 8 and 13 years old – performed intermittent runs on a treadmill. At intervals their body and skin temperatures were measured, the latter with high spec infra-red cameras.

“Using the skin temperatures we created a series of body maps. Upon analysing these we found the younger children showed a higher skin temperature which related to lower sweat rates, indicating that their sweat system may not yet be as well developed as in the older children. Hence the younger kids are more reliant on ‘dry’ heat loss.”

Dr Maarten Hupperets, Director Future Apparel at adidas, said: “In line with the findings of our study we have developed a new range of training tees specifically for kids under 10, featuring the revolutionary cooling technology of clima. The innovative fabric within the climacool products acts like a mesh and delivers increased breathability, thus creating a cooling effect on the body areas it covers.”

The Loughborough research was carried out by the Environmental Ergonomics Research Centre based in the Design School, in cooperation with the former Institute of Youth Sport.

adidas is a global designer, developer and marketer of athletic footwear, apparel and accessories with the mission to be the leading sports brand in the world. Brand adidas is part of the adidas Group, a corporation that includes brands such as Reebok and TaylorMade.