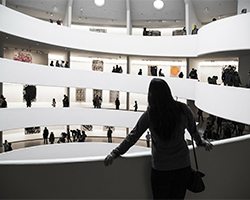 The museum visitor experience is under threat from theft and damage, putting collections at risk, new research reveals.

In some cases, this has resulted in collections being reduced or removed altogether, often in favour of a replica.

Dr Louise Grove, Senior Lecturer in Criminology and Social Policy at Loughborough University, and Dr Suzie Thomas, Lecturer in Museology at the University of Helsinki, collaborated on the research which focused on interviews with staff from eight museums (four in England and four in Finland) in a range of settings, from city centre locations to countryside and suburban venues. The museums selected included those of national status, local authority-run, universities, private foundations and charitable trusts, as well as volunteer-led organisations.

The research was funded by the University of Helsinki Future Development Fund, a scheme to enable scholars to explore new research avenues and test the viability of proposing larger projects as a result.

The research team conducted interviews with staff working in a variety of roles including security, operations, curating, observation, and management. The following four security-related issues were raised by the participants:

With low staffing levels putting a constraint on security, some sites had set up direct communication with the police to ensure a swift response if needed.

To protect staff safety in lone working situations[1], protocols were established; these included walkie-talkie communications with phrases to request support in particular situations.

Senior staff underwent security training and passed information down to junior staff and volunteers. This training was repeatedly highlighted as an area in need of improvement. It was often perceived to be outdated and irrelevant to the specific needs of museums, and particularly difficult for seasonal and part-time employees to attend.

Following an international spate of thefts targeting rhino horns, museums have been advised to place the originals in more secure storage off-site, or even to destroy them altogether.

In one participant museum, following a high profile terrorist attack elsewhere in the world, security staff immediately removed relevant objects from the display that they considered to be controversial.

Overall, damage to objects appeared more common than thefts among the sample interviewed. The risk of targeted vandalism of exhibits was a concern at one museum, and this was particularly relevant where collections contained controversial pieces.

The true level of theft from museums is probably impossible to ascertain, given the fact that cataloguing practices were diverse. This left room for gaps in staff knowledge of what had been stolen from a collection, and, as a result, left vital information sharing at risk of failure as a result of the movement of staff.

Cases of repeat victimisation – where museums were repeatedly targeted by burglars and instances of anti-social behaviour – were mentioned by more than one respondent.

There was evidence of information sharing in the immediate aftermath of a victimisation incident (to help protect neighbouring or similar museums), but communication about security outside the organisations involved was haphazard in places. Personal relationships often dictated collaborations, and broader security networks were rarely used by many in those networks, even when they did exist.

Dr Grove said balancing visitor enjoyment and accessibility of the exhibits with security can be a challenge.

“In recent years, high profile art thefts from museums and acts of terror have drawn attention to the vulnerability of museums as sites of crime and catastrophe,” she said.

“Our research revealed that museum security is under-represented due to the difficulty in discussing confidential and sensitive information, as the possibility of identification is in itself a security risk.

“We found that the first rule of museum security in many cases was ‘do not talk about museum security’. This suggests that tailored, relevant support groups are needed to effectively communicate security measures and/or risks within the museums.

“Museums should feel like a safe place in order to encourage widespread use. A mixture of budget cuts and understaffing is putting collections and the visitor experience at risk.”

Dr Thomas said: “Even within the sample of museum staff that we interviewed, we discovered not only commonalities but also very specific challenges among the different institutions. It is clear that museum security is a complex and nuanced issue, and our impression from the Finnish and English museum communities is that deeper research into this area would be very welcome.

“Our research findings are very relevant for museums and museum personnel in England and Finland, but they also have international relevance. Much of the previous academic research into museum security is from several decades ago, and challenges have changed since then; digital security is increasing in importance, for example.

“We are working closely with various partners to develop a larger research programme off the back of our findings, including the National Security Advisor for Arts Council of England, the Victoria and Albert Museum, Museoliitto (the Museums Association of Finland) and ICOM Finland.”

The research titled The rhino horn on display has been replaced by a replica: museum security in Finland and England has been published in The Journal of Conservation and Museum Studies by Ubiquity Press and is open access.