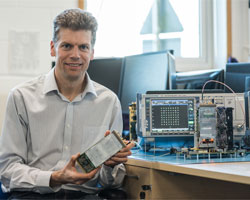 CommAgility, the leading UK wireless technology company based on Loughborough University Science and Enterprise Park, announced today that it has won a Queen’s Award for Enterprise in Innovation, the UK’s most prestigious award for business success.

This new award follows CommAgility’s 2013 Queen’s Award for Enterprise in International Trade. The company also appeared in the Sunday Times Hiscox Tech Track 100 list of fastest growing technology companies in 2015, and featured in the Deloitte UK Fast 50 in 2013 and 2012.

CommAgility received the award in recognition of its AMC-RF2x2 module, which is an innovative electronics product for 4G wireless communications. Edward Young, managing director at CommAgility, said: “The AMC-RF2x2 was developed to meet demanding customer requirements, and is a commercial and technical success – and a tribute to the expertise of our engineers.”

Based at LUSEP, CommAgility has a second office at the TecTrum Technologiezentrum für Duisburg in Germany, following its acquisition in 2015 of MIMOon, an LTE software developer. The company exports around the world, with customers in over 15 countries including the USA, China, South Korea, India, France and Israel.

Professor Tracy Bhamra, Lougborough University’s Pro Vice-Chancellor for Enterprise said: “Having originated from Motorola and Blue Wave Systems on our Science and Enterprise Park, CommAgility has continued to grow with us for a decade. This second Queen’s Award for Enterprise is fitting recognition for CommAgility’s track record in innovation.”