The coronavirus 'Doomsday' clock: Level of recovery after three weeks For the last three weeks, Dr Jon Seaton, of Loughborough's School of Business and Economics, has been illustrating, via a Doomsday-style clock, where the world is in relation to eradicating the coronavirus pandemic. He writes...

After three weeks of lockdown, and another three to go, the question is – are we there yet?

The COVID-19 journey for the UK and everyone else in the world has been draining, debilitating and very long-lasting, so it would be nice to say that we have nearly arrived.

But what is arrival? - temporary opening for a month or phased opening of shops, manufacturing, construction, schools, universities, coffee shops or allowing recovered individuals only into work or crucial sectors.

These decisions are not ours yet, but the French, Italians, Spanish and of course the Chinese have been either actioning or considering these questions.

At present, there is no clear message and sadly for the UK no clear picture due in part to the position in the cycle but also due to the lack of testing – knowing who has the virus as it differs so much from person to person: asymptomatic, symptomatic and symptomatic with severe problems.

We tend to test the latter severe symptom cases – apart of course from some high-profile people and their families.

A few weeks ago, I talked about the failure to provide the UK with any recovery statistics while the media concerned itself with the relevance of death statistics, their delay and only being documented hospital cases and not care homes.

This week I want to provide a conservative estimate of the level of recoveries for the UK (rather than a likely range) and draw people's minds to the world's regional outlook given that China and the Asian regions have experienced a growth in cases.

The sooner the world realises that this is not a local problem but a global one, the sooner we can get have a concerted effort to create global mobile facilities to stamp out this condition.

The clock created three weeks ago (from various data sources including Johns Hopkins, World-o-meter, Wikipedia and national databases), with many additions now, looks much improved for many countries – China, South Korea, Iran, Germany to name the key outliers, but also smaller countries such as Iceland, Austria and Switzerland seem to be past the halfway marker indeed Greenland seems to have got to 60 minutes past. 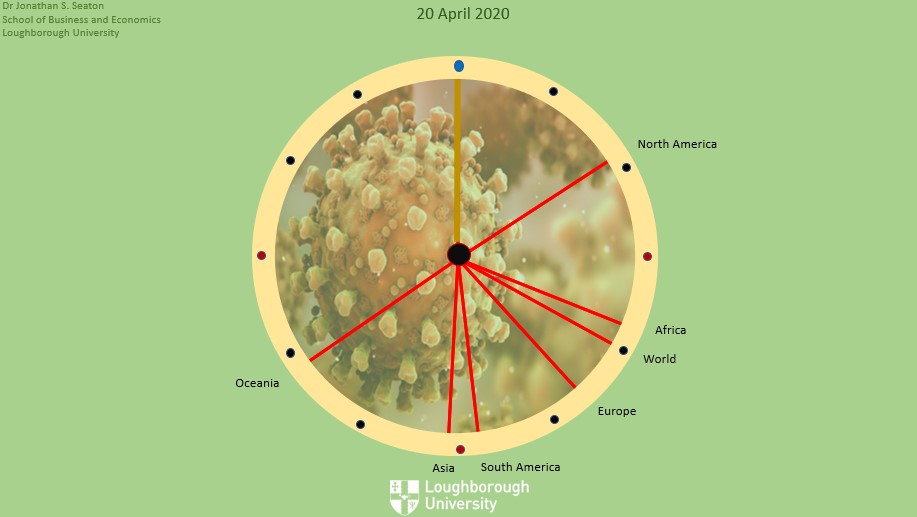 We have noticed the growth phase in cases and fatalities tends to occur in the first fifteen minutes or so, there are sadly many countries within this area, some like Portugal, Ireland and Norway not even past the five minutes phase.

The largest cohort – where we are – is between 5-10 minutes – also include the USA, Russia, India and Turkey.

Again, large daily and not yet peaked cases plus higher death counts and health services tested to capacity.

It is worth mentioning at this stage from my analysis of the statistics, the UK position is probably in a slightly better position than 8.15 minutes – closer to 16 minutes past by factoring in our likely recoveries.

In the next few weeks, we should see the gap between UK and UK(+Recoveries) accelerate.

What does this mean? Well, not that much at present but in the next 2-3 weeks we should be heading towards the 20 past and half past positions meaning a greater chance of opening up the economy.

So, knowing our recovery status really matters for that decision.

A growing number of European countries are closing in on the 20 minutes past area like Belgium, France and Italy while Spain, Finland and Denmark speed past half past the hour – they have gone through hell – but this area does show light at the end of the tunnel – from now on moving forward means much larger growth in recoveries and less pressure on hospitals.

Turning to the county regions clock – this is a new addition and based on data collected from Worldometer both Oceania and Asia are in a promising position.

But Asia is slipping back despite China's successes India, Turkey and Pakistan will have a negative impact in the region's position – given the populations involved.

Overall Europe is performing better than the world as a whole no doubt due to starting our countrywide epidemics fairly early on – and the good levels of testing in many of the major countries such as Germany.

North America is still early in its journey followed by Africa.

Sadly, we are likely to see large changes backwards in some of the regions as both testing and health resources are lacking in many regions with the larger and more concentrated urban populations.

South America is surprisingly close to 30 minutes past, recently with a surge in recoveries data pushing them forward.

No not really, there are some very good signs in a number of key countries, but unless world leadership and control of key health resources improve by learning the lessons from those further along the journey, then the virus will continue to slow and in many cases reverse the clock.