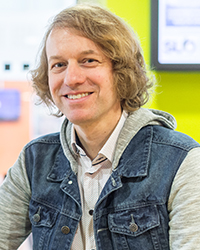 Dr Patrick Stacey at the School of Business and Economics, along with Ms Liu Liu (Queen Mary’s London) and colleagues have been studying how people with learning disabilities (LD), from mild to severe, can perform and enjoy fitness games, with the ultimate aim of helping game designers create more simplified games that motivate people with LD to exercise.

"Motivating people with learning disabilities (LD) to carry out physical exercise is a difficult task as they can often be constrained because of physical or mental impairments.

"Whilst there is a plethora of research into game design, we were interested in finding out if there are specific elements that can be utilised by game designers to help motivate people with LD to use fitness games as exercise. And we found that there are."

Performing both quantitative and qualitative studies using a game called Somability (developed by researchers at Cardiff University), Dr Stacey and colleagues focused on the conceptual outline, implementation and outcome of the game.

Findings from both the qualitative study and the quantitative study carried out by Stacey et al. support the idea that fitness games should consider user’s physical, mental, social and motivational needs. They discovered that in order for users with LD to be motivated to play, they needed positive feedback, no time limits and clear instructions.

Additionally, they found that the opportunity for repetitive play was a key element for game designers to incorporate into the game.

This research was presented at the Hawaii International Conference on System Sciences in January 2017. The paper can be viewed here as a PDF.