The healthcare scenario is changing at an increasingly rapid pace: on one hand, the population is becoming older, due to a contemporary decrease of birth rate and increase of elderly people; on the other hand, more and more technology is entering our healthcare system and our daily lives. There are growing needs for a more personalised healthcare, to allow people to live longer, healthier lives. 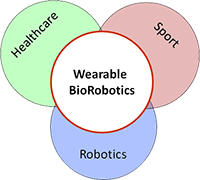 Objectives of the Wearable Biorobotics Team are the observation and the analysis of the human being, which can be seen as an extreme and exquisite example of robotic system. The research goal of the WBR Group is the quantification of the capabilities of human beings in different situations, such as training for laparoscopic surgery, mastication analysis, gait analysis in rehabilitation, as well as human-robot emotional and musical interaction, just to mention a few, and the application of these findings for developing more advanced robots.

This analysis will lead to the clarification of the basic mechanisms underlying human’s control of their bodies which, in turn, will be an extremely important and helpful tool for the aging society in order to realize better health-care systems, human-support devices, teleoperation methods, and so on.

In particular we develop of extremely small and very accurate motion sensors (inertial measurement units, electromyography sensors, and so on), much less visible and much less obtrusive than the current measuring systems. In addition, we also developed several data processing and analysis methodologies to extract useful information from the raw data flow.

The combination of advanced hardware with advanced software is making it possible to make measurements in situations where it was very difficult to measure before. For example, it allows us to achieve a better and objective understanding of the skills of the trainee, of the effectiveness of the training exercise, to quantify the movements during daily life, or to produce a meaningful interaction with the advanced robots available in the labs. Another example is that this combination allows us to understand the effects of the deformation of the mechanical structures of the robots while walking, thus making it possible for a real-time compensation. 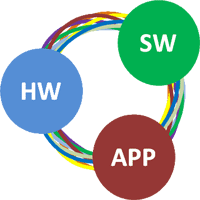 Research in the Wearable Biorobotics Team is roughly divided into 3 main areas, with a truly multidisiplinary approach, following the ideal of the “Renaissance Engineer” of the third millennium - integrating engineering with the study of Nature and of humanities:

These three areas are highly intertwined, with each area contributing to the other two and benefitting from them as well. Each new application requires new hardware or software, which in turn can enable new applications.

Most of the research is carried out in the Sports Technology Institute and in the new National Centre for Sport and Exercise Medicine - East Midlands.

Note: For the full list of publications, please check this page.

The inertial measurement unit is popularly used as a wearable and flexible tool for human motion tracking. Sensor-to-body alignment, or anatomical calibration (AC), is fundamental to improve accuracy and reliability. Current AC methods either require extra movements or are limited to specific joints. In this research, the authors propose a novel method to achieve AC from standard motion tests (such as walking, or sit-to-stand), and compare the results with the AC obtained from specially designed movements. The proposed method uses the limited acceleration range on medial-lateral direction, and applies principal component analysis to estimate the sagittal plane, while the vertical direction is estimated from acceleration during quiet stance. The results show a good correlation between the two sets of IMUs placed on frontal/back and lateral sides of head, trunk and lower limbs. Moreover, repeatability and convergence were verified. The AC obtained from sit-to-stand and walking achieved similar results as the movements specifically designed for upper and lower body AC, respectively, except for the feet. Therefore, the experiments without AC performed can be recovered through post-processing on the walking and sit-to-stand data. Moreover, extra movements for AC can be avoided during the experiment and instead achieved through the proposed method.

Walking in the uncanny valley: importance of the attractiveness on the acceptance of a robot as a working partner 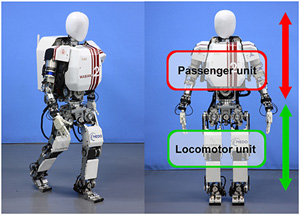 The Uncanny valley hypothesis, which tells us that almost-human characteristics in a robot or a device could cause uneasiness in human observers, is an important research theme in the Human Robot Interaction (HRI) field. Yet, that phenomenon is still not well-understood. Many have investigated the external design of humanoid robot faces and bodies but only a few studies have focused on the influence of robot movements on our perception and feelings of the Uncanny valley. Moreover, no research has investigated the possible relation between our uneasiness feeling and whether or not we would accept robots having a job in an office, a hospital or elsewhere. To better understand the Uncanny valley, we explore several factors which might have an influence on our perception of robots, be it related to the subjects, such as culture or attitude toward robots, or related to the robot such as emotions and emotional intensity displayed in its motion. We asked 69 subjects (N = 69) to rate the motions of a humanoid robot (Perceived Humanity, Eeriness, andAttractiveness) and state where they would rather see the robot performing a task. Our results suggest that, among the factors we chose to test, the attitude toward robots is the main influence on the perception of the robot related to the Uncanny valley. Robot occupation acceptability was affected only by Attractiveness, mitigating any Uncanny valley effect. We discuss the implications of these findings for the Uncanny valley and the acceptability of a robotic worker in our society. 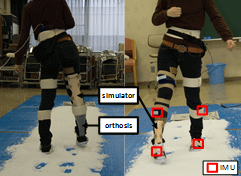 Walking on the snow

The use of inertial sensors for the gait event detection during a long-distance walking, for example on different surfaces and with different walking patterns, is important to evaluate the human locomotion. Previous studies demonstrated that gyroscopes on shank or foot are more reliable than accelerometers and magnetometers for the event detection in case of normal walking. However, these studies did not link the events with the temporal parameters used in the clinical practice; furthermore, they did not clearly verify the optimal position for the sensors depending on walking patterns and surface conditions. In this paper, we compare the event detection quality of the sensors with video, used as ground truth, according to the parameters proposed by the Gait and Clinical Movement Analysis Society. Additionally, we compare the performance of the sensor on the foot with the one on the shank. The comparison is performed considering both normal walking and deviations to the walking pattern, on different ground surfaces and/or constrains on movements. Our preliminary results show that the proposed methodology allows reliable detection of gait events, even in case of abnormal footfall and in slipping surface conditions, and that the optimal location to place the sensors is the shank.

A novel greeting selection system for a culture-adaptive humanoid robot

Robots, especially humanoids, are expected to perform human-like actions and adapt to our ways of communication in order to improve their acceptance in human society. Among humans, rules of communication change depending on background culture: greetings are a part of communication in which culture differences are strong. Robots should adapt to these specific differences in order to communicate effectively, being able to select the appropriate way of greeting for different cultures depending on the social context. In this paper we present the modelling of social factors that influence greeting choice, and the resulting novel culture-dependent greeting gesture and words selection system. An experiment with German participants was run using the humanoid robot ARMAR-IIIb. Thanks to this system, the robot can perform greeting gestures appropriate to Japanese first, and to German culture too, after interacting with Germans.

Our PhD students play a central role in our wide-ranging research activities, making vital contributions to the success of the research itself. Find out more about our current research opportunities.