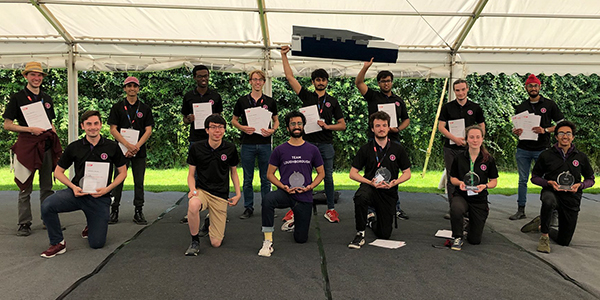 This month saw more than a dozen university teams take part in a two-day, in-person event to test the effectiveness of their unmanned aircraft system (UAS, also referred to as an unmanned aerial vehicle or UAV) at an airfield at BFMA Buckminster.

The Institute of Mechanical Engineers (IMechE) UAS Challenge 2021 took place on the 14 and 15 July and saw student teams convene to showcase the results of their hard work during tests of their UAS’ construction and systems.

Loughborough UAV took part in this year’s fly-off event, where they competed against university teams from across the UK. Their aircraft, entitled Manta, is the result of months of design, testing and building from the Eccleston Student Engineering Centre based at the university, and this was the perfect opportunity to put it to the test in a series of simulations of real-world aid missions and flying demonstrations.

Shayne Beegadhur, Team Leader of Loughborough UAV said: “These UAVs are designed to autonomously take off, fly, drop a payload whilst in flight and land without human interaction. On top of this, there are additional speed and image recognition challenges. 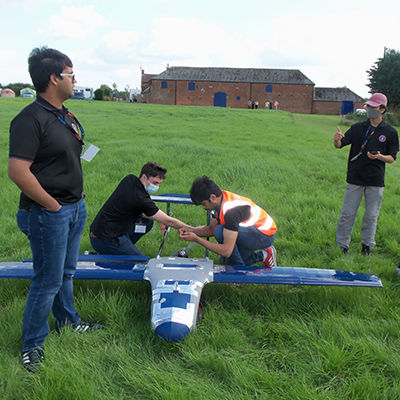 Since October 2020, we've been developing Manta to be an aircraft that can fit all the requirements stated by the IMechE whilst bringing something new to the table. With the pandemic, it would have been easier to develop a box with wings and perform really well at the competition. But we set out to produce something more innovative even if it wasn't going to be as competitive.”

Whilst some categories were judged through a combination of reports and presentation videos, the team, supported by Aeronautical Technical Tutor John Newton, managed to put their hard work to the test at the in-person Fly Off event.

Vinay Hirani, Co-lead on the Navigation team, added: “Sadly our aircraft never managed to take flight after two attempts. Even though we found the fault after the final flight, it was the end of the competition. However, I am still immensely proud of the effort and the commitment shown by everyone in the team to get to that stage, including the overnight stay in the Eccleston Student Engineering Centre to perform a full re-build of the aircraft for the final day. Luckily, we were still able to see the aircraft fly at a local flying club in the weeks leading up to the competition.”

Following the completion of two days of flying, the 2021 event culminated in an awards ceremony, to recognise the achievements of the teams competing. Loughborough UAV managed to scoop plenty of awards in recognition of their hard work and engineering skills, with the team winning the following categories:

The team were also placed as runners up in the Grand Champion category.

Shayne said: “We have all put in so much effort into designing Manta and in a year where student projects have suffered due to the pandemic, we wanted to defy the odds. All the hard work and tenacity of the team was rewarded when we came second place overall place and won the Design, Innovation, Safety and Operational Supportability awards.

In total, we won five out of a possible eight awards which were up for grabs! This is the best result we've ever achieved in the history of the competition.”

The team are now taking a well-deserved break from manufacturing, before preparation for 2022’s UAS Challenge begins in September – and the team are looking for new members from a range of academic disciplines.

Shayne said: “Whilst Manta is an innovative aircraft that flies well (when it does fly!), we can still improve. I know that the team will be left in good hands going forward and we are going to do everything to build upon this success. And who knows - maybe next year we'll win!”