EMPAC comprises five police forces, Police and Crime Commissioners (PCCs) and eight universities in the region, including Loughborough University and is based on three main objectives:

EMPAC have turned the spotlight on Loughborough research and two of the projects featured were undertaken by Automotive Engineering students Alex Sutton and Elliott MacCallum, who were supervised in their work by Professor Lisa Jackson:

Alex designed a new multi-functional police car that can safely transport prisoners without the need to call for a caged van.

The project attempted to reduce costs, increase functionality and, ensure occupant safety whilst, meeting the current performance requirements of the Police.

Currently UK Police forces use a range of different vehicles, each designed for a specific role. For example, vans are used for the transport of detainees or for several Officers, whilst medium sized hatchbacks are used for incident response vehicles (IRVs).

Several possibilities for merging two or more Police vehicles to create a multi-functional vehicle were investigated. To maximise cost and time savings an IRV was combined with a detainee transport van.

A partition was designed for use in a large estate car that separates the rear
passenger side seat from the rest of the vehicle, shown below.

Taking into account the engineering performance of the material of construction, passenger ergonomics, safety considerations and costs, the end result allows a detainee to be transported without risk to the officers in the vehicle. The rear seat behind the driver is left unmodified and therefore witnesses or victims can also be transported. The rear boot space can carry equipment that is normally carried in IRVs.

The Home Office report vehicle theft rates in the UK have been increasing year on year since 2014. Part of this rise is no doubt due to keyless vehicle entry and ignition becoming more popular however, this does not explain the full story. Although vehicle telematics hardware is improving rapidly this has not been supported by an equal increase in use of data to protect and recover vehicles.

There is an innovation opportunity to improve vehicle tracking to reduce the theft rate of vehicles in the UK and increase the chance of recovery.

In addition to a novel vehicle tracking system, a path predictive algorithm was developed by Elliott, shown below, which autonomously calculates the highest probability escape route that a thief would take. 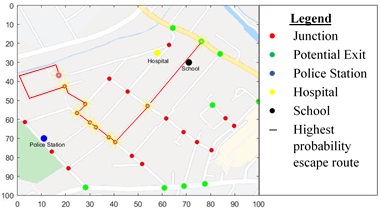 The experimental investigation is supported with a risk analysis, identifying the key potential risks and benefits of the proposed RFID tracking system using a criticality matrix. By combining the RFID vehicle tracking system and the path predictive algorithm, stolen vehicles can be tracked in real time and a probable direction of travel can be used as real-time intelligence.

The Department of Aeronautical and Automotive Engineering offers their congratulations to Alex and Elliott in respect of having their work featured by EMPAC and we look forward to seeing more in regard to these students’ achievements following graduation!

For the full news item, featuring the work of all Loughborough University students, please follow this link