Students were able to tour the department, experiencing the Anechoic Chamber, a Virtual Reality activity and a 'Who wants to be an engineer' quiz provided by DETC. Students also had the opportunity to sit in the cockpit of our Hawk 200, as well as sitting in a new Tesla Model S electric car and making their own rubber band cars.

Class 5 from Aston-on-Trent Primary School entered a competition in October 2016, run by the Advanced Propulsion Centre (APC) in conjunction with the Engineering and Physical Sciences Research Council (EPSRC.) 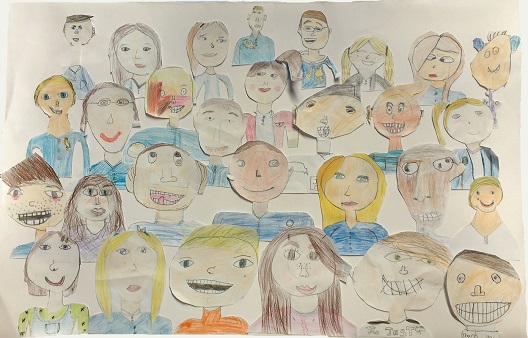 Their task was to design what they thought transport would look like in the year 2050. To their delight, they won a Goblin flat pack kit car! The principles behind this project were to encourage young people (and girls in particular) in engineering.

Dr James Knowles delivered the enormous boxed kit car in December 2016 and they started the build in January 2017. The children have worked in small groups on a weekly basis to build the chassis with Mr Chris Grant, (School Caretaker), taking the lead and the children have kept a photographic and written diary of every step.

The class then had to design and make the bodywork using recycled materials as much as possible and the final design uses a leaky boat for the bonnet! To help them with this, they gained help from a Melbourne company - Des Gosling Mobility - who sent in three mechanics to work alongside the children.

Des was thrilled to be involved with the project and thought it a good idea to send in a female mechanic to show that women are engineers too! The company are also providing the school with a class set of racing overalls.

The car, named the Aston Arrow, is now complete and the class had a successful test drive around the playground on 26th April, which was attended by Dr Knowles.

Donington Park race track are kindly allowing the students to practise for the race events on the morning of Friday June 16th, shortly before their first race.

On Wednesday June 21st the class will be racing at Stafford and on Wednesday July 5th they will be at Rockingham for the Gathering of the Goblins where the events include drag, slalom and sprint races. In addition, there is a prize for the best portfolio and record of the build. The class are now working on a creative, innovative portfolio! 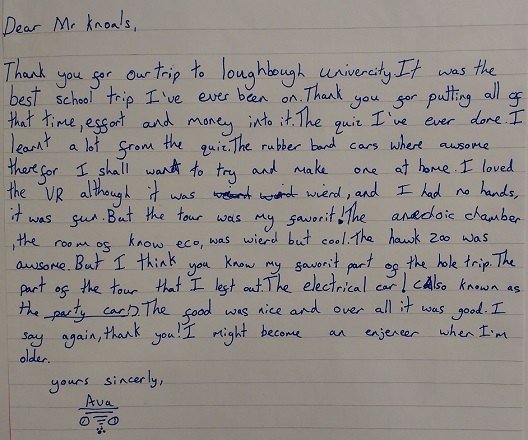 Following the school’s visit to the Department, the children made a HUGE thank you card, (above.)

Judith Long, Teacher of Class 5 and the central support for the children undertaking the challenge had this to say about the project:

“This has been a wonderful opportunity for the children in year 5. They have had the experience of constructing a vehicle from scratch which they can actually drive and race against other schools. They have been able to see their ideas and designs come to fruition. The whole project has promoted the face of engineering and has generated an enormous amount of excitement in the whole school community.”

We would like to say that we have really enjoyed supporting Class 5 and wish them the very best of luck in their races in July, but the last words should come from the children themselves…

"It was hard work but worth it." Victor

"It was really fun trying something new." Lily

"It was hard work constructing the car but it was all astonishing when we got to drive it." Oliver

"We couldn't have managed without Mr Knowles and Mr Grant supervising the construction." Caitlin