Teams of approximately 10 students have been working on the design of various aerospace vehicles since October 2016 and at the event, they displayed their final designs. 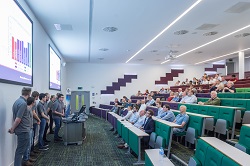 The presentations took place in a Royal Aeronautical Society public lecture in Edward Herbert Building, on the Loughborough University campus.

Student groups displayed their models and posters before and after the presentations and the event ended with a drinks reception.

Details on each of the design projects are detailed below: 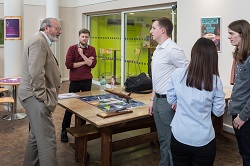 Nemesis is an autonomous next generation fighter aircraft which has been designed for entry into service by 2060. Since the introduction of aircraft into the theatre of war, controlling airspace in combat zones has been a major priority for all parties. Nemesis is able to achieve this while also reducing the risk to human life through its autonomy. It is an advanced combat system that combines extreme manoeuvrability with a tail-sitting VTOL capability. 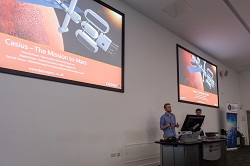 Casius is a concept for a manned mission to Mars. Many space agencies are planning manned missions in the 2030s, as Mars could be the key stepping stone to further human exploration of the solar system and beyond. The Casius mission will send three astronauts to Mars and return them by 2038, with a total mission time of 912 days, including a 524 day surface mission. Commercial launch vehicles will deliver the total mission mass of 1,054 tonnes to low Earth orbit for assembly. The transit vehicles will depart in 2035 on their 197 day journey to Mars. Descent vehicles will carry the crew and equipment to the Martian surface, where the crew will use a rover to gather surface samples. The crew will launch from the surface to return to their transit vehicle in mid-2037, returning to Earth 174 days later.

Skeiron is a supersonic civil air transport aircraft capable of carrying 60 passengers across the Pacific. Current civil airliners can fly from Los Angeles to Hong Kong in 16 hours—Skeiron can do it in just 5 hours. Cruising at Mach 2.5 for up to 6,000 nmi makes this aircraft the longest range supersonic aircraft ever. New and existing technology is used all across the aircraft, including bespoke variable cycle engines, over 50% composite structure and an augmented reality system to aid pilot vision. Skeiron is bringing supersonic travel back to the public. 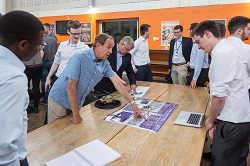 Pegasus aims to save lives on ground based forward patrol missions. In current operations, improvised explosive devices (IEDs) or other unforeseen obstacles can cause patrols to halt making all crew vulnerable to attack. Pegasus can use flight to quickly overcome this. The vehicle has two very unique features: The first is a co-axial rotor system used to provide lift which is retracted behind the vehicle to reduce the packaging dimensions during ground operations. The second is the cockpit controls which are designed in line with ground vehicles which reduces both the training time and training cost. 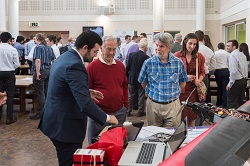 Project “Atlas” is Loughborough University’s entry to the IMechE UAS Challenge 2017. The system has been developed to complete a representative humanitarian aid mission, and will be assessed on Payload Delivery, Reconnaissance and Endurance. The aircraft operates with complete autonomy, performing take-off, target identification and landing without any operator input. Key features of the design include its topologically optimised fuselage, T-tail configuration for maximum aerodynamic efficiency, use of the latest generation of the Pixhawk flight controller and high-speed ground-based optical character recognition (OCR). With an MTOM of 6.9 kg, the aircraft can deploy two 1 kg bags of flour to any target within a 10 km range. Flight testing has begun and the aircraft has already successfully completed an autonomous mission in preparation for the competition in mid-June. An extensive test programme has been developed to ensure the system performs to the maximum of its ability during the competition.

“All the teams were a credit to the Department, giving sleek and professional presentations to the local aerospace community, and displaying their models and posters in the exhibition.

The UAS team will also be competing in the ‘IMechE UAS Challenge’ on 19-20 June 2017 in Llanbedr (Wales) against other university teams from around the world. They were also present to display their impressive system hardware at the exhibition.

Overall, the evening was a high note to finish the academic year with.”