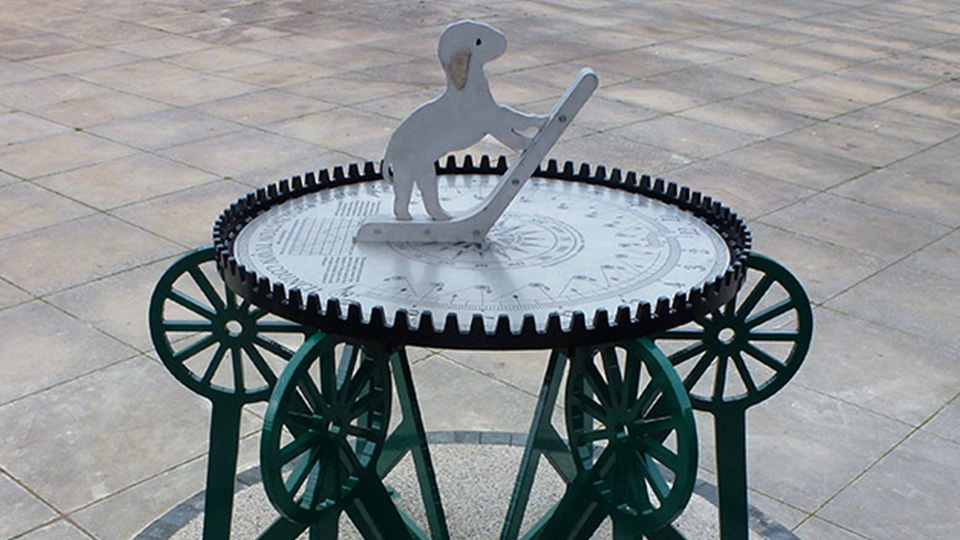 In his retirement, alumnus Tony Moss has designed and built over 190 sundials for locations from Vancouver Island to Hong Kong.

A sundial is a device that tells the time of day when there is sunlight by the apparent position of the sun in the sky. They typically consist of a flat plate (the dial) and a gnomon, which casts a shadow onto the dial, enabling the user to tell the time.

Most recently, he gifted a sundial to his hometown of Bedlington, Northumbria. It is complete with their famous Bedlington Terrier supporting the gnomon.

Sundialling has taken Tony, who studied Design and Technology, around the world. He graduated in 1961 and is a member of both the British Sundial and the North American Sundial Societies. Their conferences have allowed him to gain many contacts for what he describes as his retirement hobby.

Tony says that the skills he learned at university have allowed him to develop the practical skills he needed to pursue his hobby, and that he has enjoyed teaching these skills to new people. He suggests that understanding how you learn is an important part of self-development.

Prior to his retirement, Tony had a career as a schoolteacher and then later as a Senior Lecturer and Course Leader in Applied Science and Technology. He typically divided his time between Industrial Design and PGCE teacher education.

Tony taught many students throughout his career, perhaps the most notable of which was Jony Ive, former Chief Design Officer of Apple, who was responsible for many of their famous computer products.

Tony also helped to develop NESTEC (North East Science & Technology Education Centre) and was tasked with bringing together the schools and facilities of local further and higher education institutions. He describes this as one of the most rewarding experiences of his career.

After taking early retirement from education, Tony spent some of his spare time gliding, eventually becoming Senior Inspector of Airframes for the British Gliding Association, which led to him setting up his own firm, Lindisfarne Aviation Ltd.

It was at this point a gliding colleague designing sundials, but without the skills to make them, came to him for help. Thirty years later he has now completed the delivery of the Bedlington sundial.